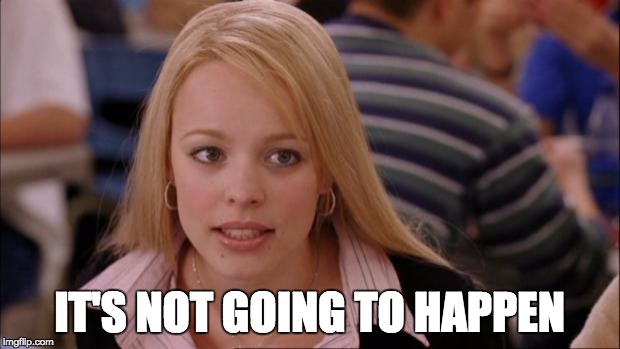 [author image=”http://echo.snu.edu/wp-content/uploads/2016/01/12573878_10205054404589975_728611374538730368_n.jpg”] Andrew Griffin, Business and Social Media Manager
Andrew is an amateur philosopher pretending to be an English major. When he pulls himself out of the caverns of his skepticism, he enjoys dry sarcasm, inquisitive conversation and college football. After he graduates from SNU this May, he hopes to make a career out of fleeing from the mundane. He is considering law school, but is open to any good suggestions. [/author]

Some of you might have mild social anxiety. I envy you. Walking into a crowded room with where everyone has their outfit on “fleek” makes me feel like I’m covered in bubble wrap. One wrong move and the whole room will be saying “What was that?” just like Regina George (shoutout to “Mean Girls”). So, in light of that, I wanted to write something for all my brothers and sisters in Christ who overthink every social situation. This one’s for you:

1. Don’t go with someone who’s a complete train wreck.
Sometimes, this isn’t an option, and sorry ladies there is always next year, unless you’re a senior, and if you’re a senior then just know you’re storing up treasures in heaven. Thankfully, most guys are insecure, and will send out spies to see if you’re interested. Be very aware of this.

2. Observe gender norms to the best of your ability.
Now may not be the best time to call your dude “cute” or call your “gurl” a “big eater” (True story). Men, act as gentlemanly as possible; women, act as womanly as possible. Not because it is right, but because gender stands during public occasions make everyone really uncomfortable.
(If you disagree with me then please go right ahead, the goal of this is to avoid awkward, not to save the world.)

3. If it feels risky, it probably is!
Whether it’s your high heels that you swear you could walk well in earlier, or your friends jacket that “pretty much fits,” if it feels risky then just don’t. This is not limited to clothes; this encompasses every decision. If you’re thinking about making a joke which is within 10 feet of anything mean, sexist, offensive, controversial or rude, just don’t. When people are trying their best to be at their coolest, they won’t be the most understanding when you say something that might have been sarcastic.

4. Nobody likes a scrooge.
If you’re reading this right now, and don’t have a date, go ask one; and if you can’t (because of those pesky gender roles) ask all your friends to get you a date. Don’t let your pride get in the way of an awesome night. Similarly, don’t let your pessimism ruin a good time. So, if you realize five minutes after you were supposed to leave for the event that you don’t know how to tie a bow tie, go without one. If you have to wait for five minutes for you food, just chill. If you get separated from your friends, make new ones! Above all else, make the best of it, because no one likes a scrooge!

So, take these words of wisdom that I have graciously decided to share with you and use them at Heartpal this Friday from 8 p.m. to 11 p.m. at the Oklahoma City Museum of Arts. Or you could just leave them; it’s up to you.