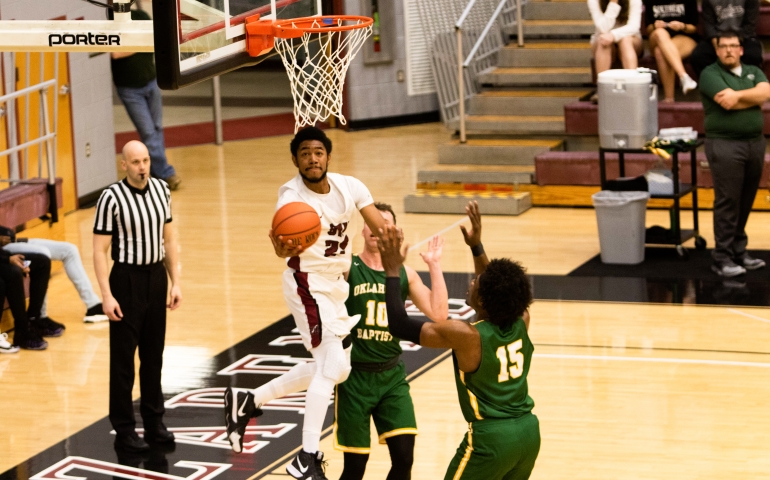 There is no way you have been to a men’s basketball game without watching number 25 make his famous three-pointer shots. Jhonathan Dunn, also known as JD or JDunn, has made a total of 1466 points during his basketball college career. The hours he invests in training reflect on the court every single game. JDunn was named the Great American Conference player of the 2017-2018 year.

JDunn says he has always had a basketball in his hand as he started playing basketball at the age of four after joining a YMCA league– sports have always called his name. In middle school, JDunn played basketball, football, soccer and baseball, but during high school, JDunn made the decision to only focus on improving his basketball skills.

When asked about his experience at SNU, JDunn expressed how he learns something new about himself every single day. Although faith is a huge part of this campus, JDunn feels like SNU does not force Christianity. From the very beginning, JDunn felt accepted even though he did not know much about Christianity. He likes how this school is willing to teach and help him learn and grow in his faith. During his time in China, JDunn learned and practiced Buddhism, and today, he is able to see the connections between Christianity and Buddhism.

The basketball team contributes to his positive experience at SNU, and he views his coaches and teammates as influential people. JDunn values the connections he has with them, saying, “The last two years have been the best for me not just because of the championship but because of the people.”

He is also thankful for the supporters who come out and support their games. He thanks alumni, storm chasers, cheerleaders and the spirit squad for being at the games. In addition, he shouts out Adalis Parker, Andrew Marston and Breena Sarver. JDunn expressed that the supporters bring the extra power they need, challenging students to fill up the seats at all sporting events, not just basketball games.

Before a basketball game, you can find JDunn chilling in the student section with his airpods in as he watches the women’s basketball game. He likes to listen to Logic and Anonymous as he waits for the game.

Although he may look calm and collected on the outside, JDunn gets nervous before games. During the moments of nervousness, he remembers his father’s words: “If you’re not nervous, you’re not human.” He also thinks about what he has learned and done in practice. He is never scared to play because he trusts his ability to play; rather, he is nervous because he trusts his ability to play and wants to do great at it.

JDunn exemplifies the importance of drive and work ethic, using his talent to push himself to become better each and every day. Support JDunn and the other hard-working basketball players in the GAC championship tournament on Sunday, March 10 in Bartlesville, OK!