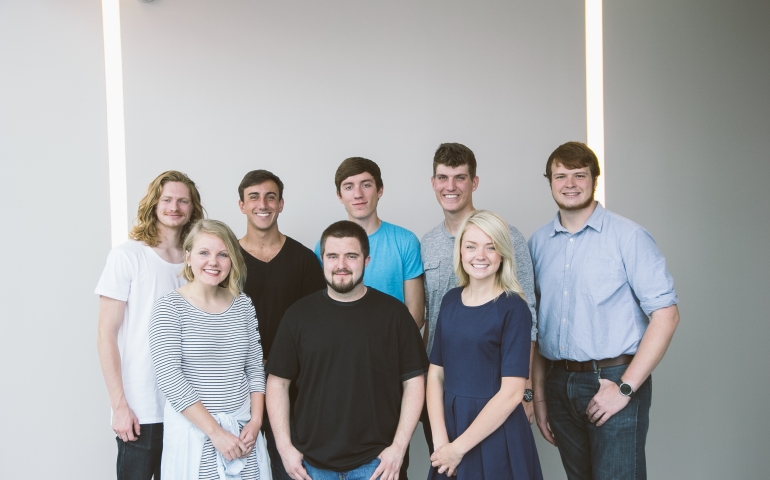 To get a better understanding of what the summer looked like for the other members of Remedy, I sat down with a few of the band members to catch up and talk about their summer. You may be asking yourself, “What is Remedy?” Before our first camp, I didn’t fully understand either. To sum it up, Remedy is a worship band consisting of SNU students who travel to Nazarene camps and churches in the SNU district. This last summer, Remedy traveled to 12 different churches and 10 different camps. Remedy also had the opportunity be apart of “The Experience” at Nazarene Youth Conference. I asked Carl Everett, junior, what kind of impact NYC had on him.

“It put the bug in my ear of the constant thought of ‘Thy Kingdom,’ ” said Everett. “In other words, is this something that is going to impact the kingdom, or am I doing it for myself?”

Remedy had a blast this summer, not only leading worship but also bonding together. Cello and piano player Jeffery Johnson said, “One of my favorite memories with the group was floating down the Camp Bond river.”

Why is Remedy important to SNU? Felipe Simoes, the keyset for Remedy, said, “It sets the standard of worship at SNU and gives new students the chance to grow closer to God.”

Looking back on the summer, one of the most memorable moments was the first camp we went to. The excitement and energy that came with worshiping with students who were anticipating camp and came with a heart ready to worship allowed us to come into the presence of the Lord without any distraction.

The first camp was such an important bonding moment for the group, but the next camp had something different to offer. As we began our first set, the campers didn’t have the same attitude as the last camp. They looked confused and weren’t sure what this “whole worship thing” was about. I am so thankful for churches who bring their students to church camp. The students’ perception of what worship was about was shaped around the idea of what they remembered from being at church with their parents–basically being quiet and not talking. This left us as a band puzzled and wondering what had changed from the last camp.

We were able to lead small groups at the camp, which helped us get to know the students better and vice versa. It was on the third night of camp where we saw God move in an awesome way. In the middle of the worship set, it was as if the students finally understood what worship was all about–students sobbing at the altar and worshiping God truly for the first time. One of the kids said in a small group that before he came to camp, he didn’t feel like he mattered to his friends or his family, and to hear there is a God who so boldly and jealously loves him made him feel whole for the first time.

Without the platform Remedy offers, moments like these couldn’t have made their way to us as a band. For more information about Remedy, go to http://snu.edu/remedy.