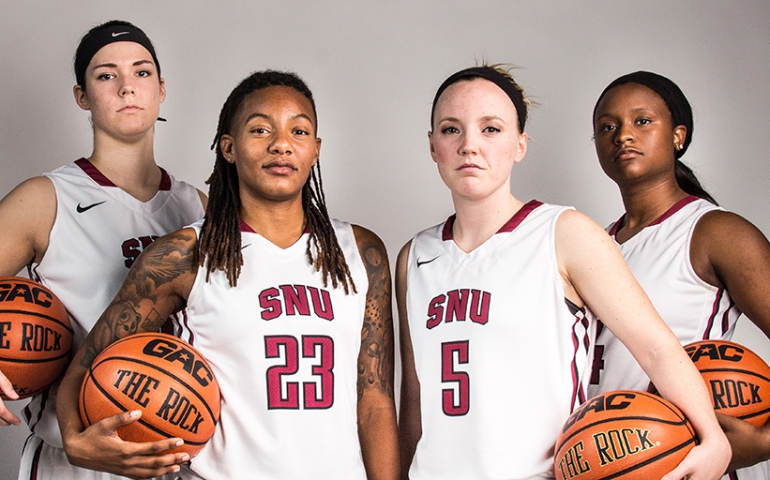 On Friday, November 11, the Crimson Storm women’s basketball team kick off their season against the University of Science & Arts of Oklahoma at 8:00p.m. in the Sawyer Center. Led by coach Derek Dorris and assistant coach Logan Martin, the team went 6-19 in the 2015-16 season but are hopeful for this year.

I sat down with Rachel Doerneman (#42) , Abby Boyd (#5), Danielle Gaddis (#23), and Olivia  Chapman (#4) — returning players — to hear how they felt about the season, some things to look forward to, and what it’s really like being a part of the Crimson Storm women’s basketball team.

Rachel Doerneman, a junior forward, said she is excited for the coming season. “We have a lot of new talented girls that bring such a strong aspect to this team, and I cannot wait to see what we’re able to accomplish this year. Y’all can definitely be looking forward to some good games to come too!”

She continued by describing the impact being a part of the team has been. “I’ve learned so many things being a part of this team, but one of the most important and simplest lessons I’ve learned is to stay happy. We put so much time and effort into this sport, and if we’re not happy doing it, what’s the point? This game brings me so much joy and it makes a world of difference when my teammates and coaches are constantly reminding me to go have fun out on the court.”

Abby Boyd, a senior shooting guard, said playing at SNU had always been a dream of hers. She said, “honestly, I have to say it was when I put on that SNU jersey for the very first time, knowing that I had made it to my dream!…Still, my favorites memories will always be the games in which we all fought so hard and left it all out there. Those games will never be forgotten.”

Boyd noted that one of her greatest inspirations is one of the coaches at SNU, Coach Logan Martin. Boyd said, “she has no idea what an impact she has had on me, even since she was a player and I would be in the stands watching her. How cool is it to say that you were coached by the player you looked up to [that] much?”

Olivia Chapman, a senior shooting guard and small forward, said, “One important thing I’ve learned about is fighting through adversity. In basketball and life, you will face adversity, but it is important to work through it. I have learned that I am stronger than any adversity that I will ever face, and that I am even stronger when I have my teammates to fight through it with me.”

Chapman said she is inspired daily by both the women that have already left their legacy at SNU and those currently on the team. She said, “My biggest inspirations are the women who have played before me as well as my teammates. To see my teammates work so hard and sacrifice so much motivates me to be a better player and person.”

Danielle Gaddis, a senior small forward, stressed the impact the relationships she has built with her teammates has made on her. She says, “The girls, both graduated and currently here, have allowed me to grow as a person and a player and I thank them for that. They have been there for me both on and off the court. I value my girls more than anything!…My motivation to achieve comes directly from my teammates. They push me to be the best version of myself that I can be.”

All the players seemed incredibly optimistic about this season, but also recognized the impact just being on the team has had on their own lives. Interestingly, each of them noted that the familial bond among teammates has not only made their SNU experience a more enjoyable one but also helped them grow and mature. This team embodies “Character, Culture, Christ” and the true spirit of this institution. #RollStorm.

[author image=”http://echo.snu.edu/wp-content/uploads/2014/01/IMG_2377-150×150.jpg”] Alina Scott, Staff Photographer
Alina is a history major and English minor here at SNU. She is originally from Belize, C.A., and loves reading books, studying history and all things Abraham Lincoln. She has worked as a U.S. history tutor and after grad school plans to become a college history professor. [/author]