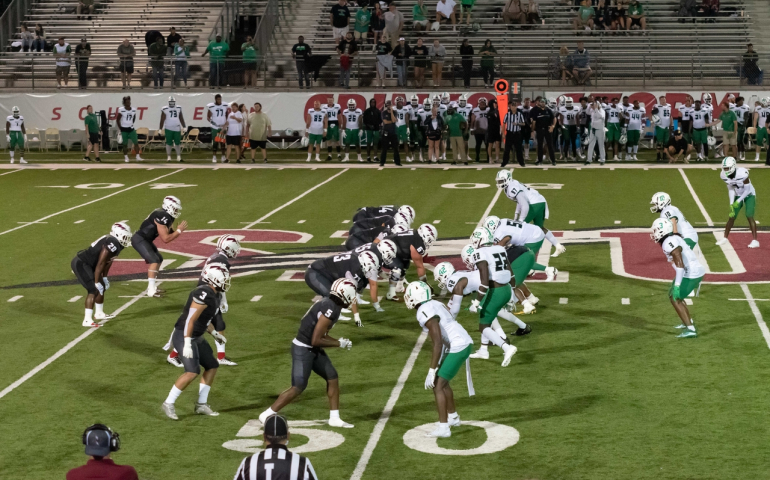 It’s football time in Oklahoma! This past Thursday, SNU played its first football game against Arkansas Monticello in a thunderous battle through the rain. Students packed Hada’s House to witness the birth of a new football season. SNU battled hard but came up short to Monticello in a 40-26 loss. Here are some stat lines and stories from the game in this recap of week one in the Great American Conference.

The wrath of Oklahoma’s weather was on full display Thursday night as continuous rainfall caused the field to be flooded with standing water, and the parking lots turned into ponds. Almost ankle-deep in water, SNU went down early 21-0 at the beginning of the second quarter. But as the sun began to shine through the clouds, so did SNU. Behind veteran quarterback Gage Porter, SNU scored 19 unanswered points including various interceptions and a safety by SNU’s defense. SNU went into halftime down 21-19.

The third quarter witnessed back-and-forth football with quick touchdowns coming from both teams. Entering the final quarter only down eight points, a stalemate ensued, with neither team being able to put points on the board. That is, until a late touchdown sealed the game for Monticello.

Quarterback Gage Porter accounted for 274 yards of total offense and 3 touchdowns. One of them was a 20-yard pass to Running Back Angel Ramirez. Asa Robertson was the Crimson Storm’s leading receiver with 3 receptions for 51 yards. On defense Safety Elijah Calhoun led the team with 9 tackles. Trenton Smith had one interception and Josh Johnson had two interceptions against Monticello.

It was a tough loss for SNU, however, there were plenty of bright spots to look forward to as the season progresses. Senior Offensive lineman Grayson Winters spoke about his team’s performance after the game. “I thought we played extremely physical on both sides of the ball,” said Winters. “But the bottom line is we have to eliminate penalties in important situations to succeed.” The Crimson Storm had a total of 8 penalties for a total of 60 yards.

With week one in the books, there is plenty of excitement to look forward to in the future weeks for SNU football. Next Saturday, September 10th, The Crimson Storm takes on the Ouachita Baptist Tigers for their first road game of the season. Be sure to tune into the live stream on the SNU Athletics website to watch the game!