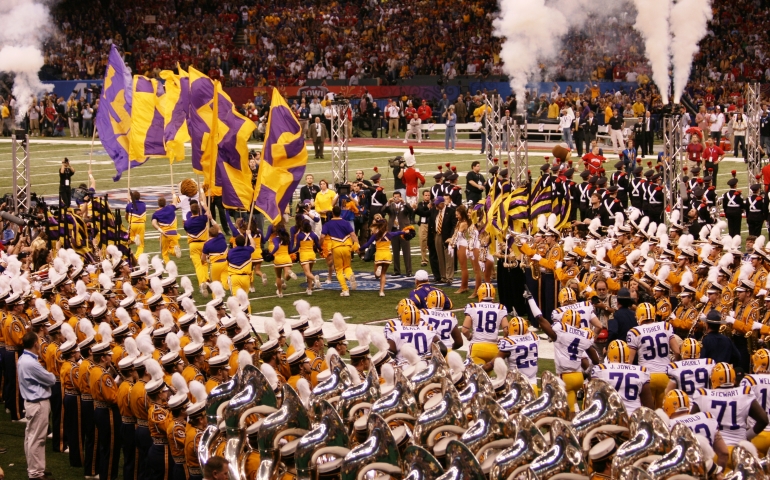 The Louisiana State  (LSU) Tigers played the Clemson Tigers last week in the National Championship, at the New Orleans Superdome. It was the most highly anticipated college game of the whole year. Everyone was dying to see if the Heisman winner, Joe Burrow, and the LSU Tigers could take down the mighty Clemson Tigers. Clemson was led by Trevor Lawerence, who at that point was undefeated in every single one of the games he had played. LSU ultimately won the game, and Joe Burrow rode off victorious into the sunset, a perfect ending to a very complicated career.

LSU finished the season at 13-0, 10-0 SEC, and some people are now speculating if they should be involved in the discussion of having the best season in college football history. Southern Nazarene freshman Benny Rivas said, “I don’t think LSU has the best team or season ever, but that’s probably because I’m a Texas fan, and we had the best team when we had Vince Young.” Benny is referring to when Texas won the BCS National Championship back in 2005, led by Vince Young.

Rivas was also questioned about who he thought would be in this game. He said, “I thought LSU was going to win, because their mindset was outside the box and just plainly wanted it more.” This is a great answer to this question. At points in the second half, it seemed as if the Clemson defense had thrown in the towel already. LSU did the opposite. The whole game they played like they would do anything to hold that trophy at the end of the night, and it paid off.

Another big storyline of this game was the record of the Clemson Tigers with Trevor Lawrence under center. They had won their last 29 games with Lawrence leading the way. Lawrence had not lost a game dating all the way back to 2017 when he was still in high school.

SNU sophomore JD Eddy said, “I wanted to see Clemson win because I wanted to see Lawrence continue his amazing win streak, but I knew LSU would win because of the incredible talent they have.” The player that many people think has the most talent of anyone who played this game was Joe Burrow. Eddy also had very high praise for Burrow saying, “He’s the complete package…The only other player who you could compare to him would be Tom Brady.”

Whatever your personal opinion is, there is no doubt that Burrow is unlike anything we’ve ever seen. According to Eddy, if they get a chance to play again next year, there may be a different outcome. “Clemson will be a lot better next year with how much talent they have coming back, and LSU is losing everyone,” said Eddy. This game definitely lived up to the hype and put on its fair share of fireworks. Now it is time to get ready for next season, to see who will hoist that trophy up into the air. If you’re lucky, maybe your favorite team will be there.