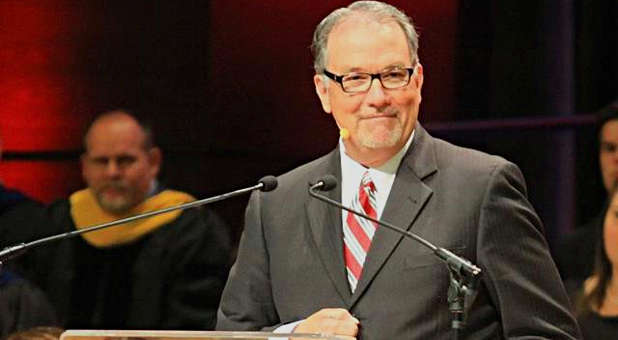 This afternoon the SNU Board of Trustees held a press conference on campus to announce that Dr. J. Keith Newman had been elected to serve as SNU’s next President.  Newman will become president of the university August 1, 2017, following the retirement of Dr. Loren P. Gresham, SNU’s president since 1989.

Newman’s election is the culmination of an extensive search that was begun last fall by SNU’s Board and Presidential Search Committee. The process was facilitated by CarterBaldwin Executive Search. “Dr. Newman is an outstanding leader, educator, and churchman with a remarkable record of accomplishment,” said Dr. Brad Moore, Chair of the SNU Board of Trustees and its Presidential Search Committee. “He’s an alumnus of SNU and also a former SNU trustee, so he’s very familiar with the school and well-known by many SNU constituents. We’re delighted with his acceptance of SNU’s presidency and look forward to working alongside him and his wife Carolyn.”

“Carolyn and I are grateful for this opportunity to serve the Church of the Nazarene, the Board of Trustees, alumni, faculty, staff, and especially students,” said Dr. Newman. “We love SNU and are committed to continuing her mission of making Christlike disciples through higher education in Christ-centered community. Dr. and Mrs. Gresham have led SNU with excellence, with vision, and with purpose. We’re deeply honored to follow in their footsteps and to become part of the team that will lead the university in the days ahead. We solicit your prayers for God’s continued blessing on SNU.”

Dr. Newman is coming to SNU from Indiana Wesleyan University, the largest school in the Council of Christian Colleges and Universities. He has been at IWU for eight years, most recently as CEO and Chancellor of the school’s main campus in Marion, Indiana, which has a residential student population of over 3,000 and a 2017 freshman retention rate of 82%. He and his cabinet manage an annual budget of over $100 million, and he has led fund-raising initiatives that have not only enabled IWU to make important campus additions but have also contributed significantly to growing IWU’s endowment from $44 million in 2009 to over $160 million today.

For the seven years before going to Indiana Wesleyan, Dr. Newman was Vice President of University Relations at Mount Vernon Nazarene University, a position for which he was recruited following 17 years in Nazarene pastoral ministry that included senior pastorates in Arkansas, Texas, and California. Before becoming a pastor, Newman was an officer and homicide detective in the Houston Police Department. That’s where he met another homicide detective, Carolyn, who would later become his wife.

Dr. Newman earned his bachelor’s degree from Houston Baptist University with a double major in Christianity and History. He subsequently earned a Master of Ministry degree from Southern Nazarene University and a Doctorate of Education at Spalding University with a concentration in leadership. His doctoral dissertation was on the leadership qualities of Dr. J.B. Chapman, educational leader in the Church of the Nazarene. He also did doctoral work at the University of Houston while pastoring in that city.

Keith and Carolyn Newman’s son, daughter-in-law, and granddaughter, Andy, Jennifer, and Avery, live in Houston, Texas. Andy, an environmental biologist, and Jen, a human resources professional, are both 2007 graduates of Mount Vernon Nazarene University. The Newmans’ daughter, Alana, is a 2014 graduate of Southern Nazarene.  She lives in Austin, Texas, where she’s a college coach for The Princeton Review.