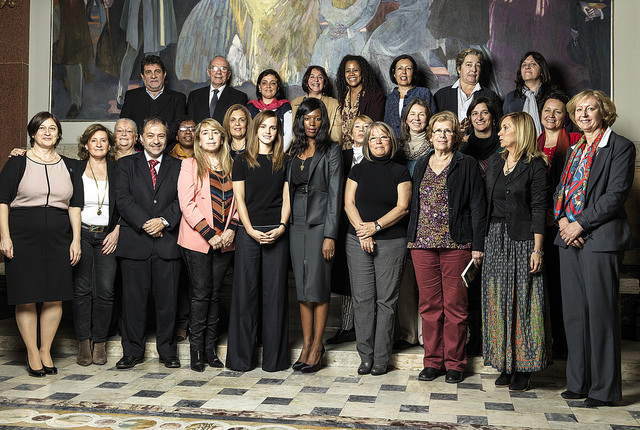 “I am reaching out to you because I need your help. We want to end gender inequality—and to do that we need everyone to be involved.” –Emma Watson

Feminism has become such a hot topic in today’s times. We hear it during lunch hour discussions, in the media, in our classes, in politics. Some men and women strongly identify as feminists and stand firm on their beliefs. Others are a bit hesitant, unsure of what to make of the word “feminism” or not sure how to align their beliefs with feminist ones. What does feminism mean to you? To our campus? To our nation? To our world?

One young woman recently took to the platform and stepped out to redefine feminism and address inequality issues pertaining to not just women but to men as well.

We knew this young woman as Hermione Granger, the bright witch in the Harry Potter films, but Emma Watson has now taken on a new role: she is an United Nations Women Goodwill Ambassador. Watson spoke at the UN headquarters on September 20, 2014 and took the first step to launch the HeforShe campaign: a campaign inviting and reaching out to one billion men to stand alongside their fellow women and end the inequalities they face on a daily basis. Watson’s speech was impassioned and inspiring:

“Men—I would like to take this opportunity to extend your formal invitation. Gender equality is your issue too. Because to date, I’ve seen my father’s role as a parent being valued less by society despite my needing his presence as a child as much as my mother’s,” said Watson during the speech.

Watson addressed the the word “feminism” and how too often people relate the word to man-hating and woman superiority. In the end, Watson declares that feminism isn’t about women at all. To her, the definition of feminism is this: “The belief that men and women should have equal rights and opportunities. It is the theory of the political, economic and social equality of the sexes.”

We know that here at SNU, there are many who identify as feminists and applaud Watson’s speech. There is even a Gender Equally Club, led by Mady Martin, which meets once a week to discuss gender issues for both sexes and how men and women can better themselves by working together to resolve the social stigmas both sexes battle. With a 52% female population on our campus, it’s no wonder that feminism is a growing hot topic here at SNU. The truth is, however, that gender equality is now becoming a huge part of our culture. Feminism is no longer about women. It’s about us. Gender inequality is everyone’s issue.

Watson’s speech is a game changer for many feminist issues. So what does this mean for our campus? How does to apply to us?