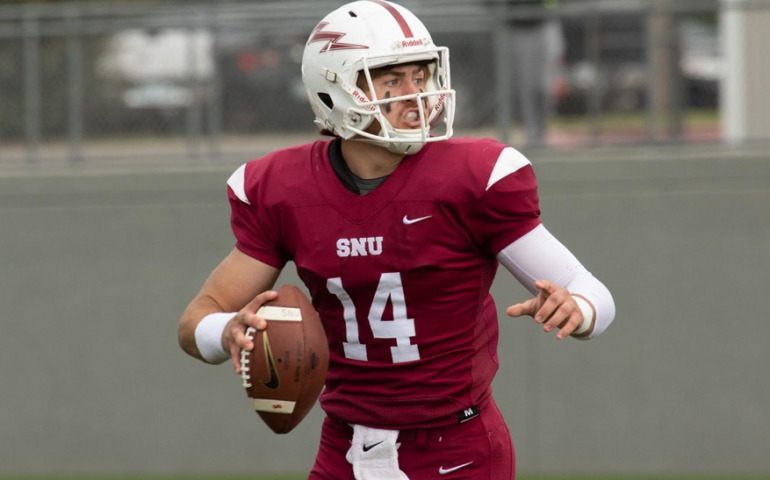 Gage Porter, the starting quarterback on the Southern Nazarene University (SNU) football team, is a junior who leads the team into battle every weekend during the season. In an interview, he shared his goals and expectations for the current season.

“Coming into this season, we had big hopes to win eight or nine games, but after the first three games and none of them going our way, we’re looking to get this thing turned around… get some momentum going into the back half of the season.” The Crimson Storm started the season with two road trips. Looking at the remainder of the season, five of the next eight games are at home including their final two games.

Gage had this to say about the back half of the season: “We like our odds–it’s always a lot better to play at home with the advantage and the energy our fans bring to the stadium. I want the team to win over anything. That’s my main goal. Team success is much better than personal goals. I’d be happy if I accomplished any, but winning as a team is the goal. We’ve returned nine of our offensive players from last year and love the team we have.”

Gage is from Elk City, Okla., which is just over an hour and a half west of Bethany.  When I asked Gage about why he chose SNU and his favorite part of playing for SNU, he had an answer many of us can admire. “The coaches and location kind of helped choose it. My favorite part about playing here is the fight our team has and the comradery we have. The passion we have for the game is amazing.”

Gage is pursuing a degree in business management but has not narrowed down what he wants to do with the degree. He still has a few years left of eligibility and is waiting to see where that takes him.

Students on campus may know Gage as the leader of the football team or just another athlete, but this is what he had to share about himself as a person off the football field. “I’m just a chill guy, honestly. I love to hang out with friends and family. I love kicking it back with friends. I’m a huge outdoors person– hunting, fishing and relaxing are all some of my favorite things.”

Everyone likes to be remembered for something wherever they go. Gage had a unique and personal answer that revealed just how much of a competitor he is throughout life. “If I could be remembered for one thing, I would want it to be my fight and how I never give up–my ability to fight through anything.”

Here is Gage’s message to football fans after the first three games: “Come out and support us. Y’all mean more to us than you could ever know. Without y’all, we aren’t anything. I promise to you all that we’re going to get this thing turned around in the back half and make SNU proud.”