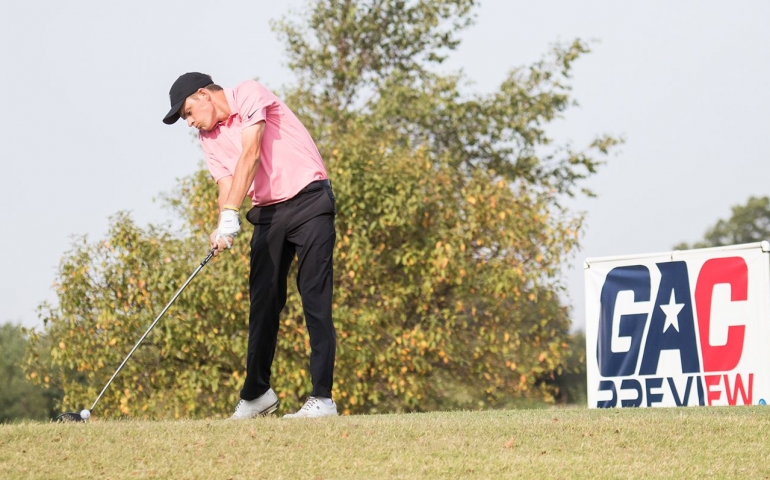 Rhett Bechtel is a senior accounting major at Southern Nazarene University and is the captain of the SNU golf Team. After playing for SNU for four years, Rhett was recently recognized as the Great American Conference (GAC) golfer of the week for winning the Houston Classic.

Bechtel fell in love with golf at age 11, almost by chance, after his grandfather won a golf club and his mom took him to a driving range. For golfers at Bechtel’s level, being introduced to golf at 11 is fairly late; however, Bechtel’s determination and passion for the sport has taken him farther than many athletes ever get.

Bechtel describes golf as an individual sport, noting that “with baseball there’s the team aspect, but with golf you don’t have to blame anybody but yourself. There’s a high amount of accountability. It’s up to you: you can put in the work or you don’t have to. Your results are driven by that.”

The results that Bechtel has achieved while playing for SNU are reflective of the work that he has put in for years. Bechtel came to SNU after being recruited by Coach Taylor, who had seen him golf through his high school years, and his time at SNU has led him to become not only a great golfer but a great leader as well.

Outside of golf, Bechtel loves movies and television, his favorite genres being mystery and thriller. He cited Dexter and Game of Thrones as a few of his favorite shows. Bechtel also loves to play video games and basketball, but he is much more into television and movies. When asked what his favorite film is, Bechtel struggled to choose and ultimately landed on The Shawshank Redemption, but he added, “I usually make lists of top-tens.”

Rhett Bechtel’s dedication to golf and his love for competition has shaped him into a remarkable athlete and valuable asset to his team. However, it is his humility and his friendliness which are both apparent to those who meet him that make Rhett Bechtel one of the best athletes and leaders that SNU has to offer.