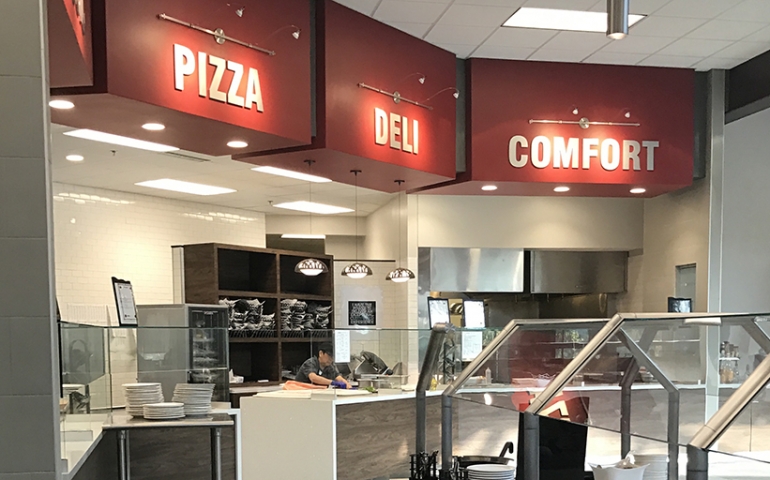 If you’ve attempted to grab a sandwich in between classes, take a banana to eat later, or pick up a cookie to eat heading out of SNU Dining this semester, you’ve probably left feeling dejected with no food in hand.

Many have found, through both personal experience and tales from others, that SNU Dining has become much stricter when it comes to food leaving the room. Unlike last year, food and drinks cannot leave SNU Dining unless one is already in the process of eating the food they have. This is a hot topic and everyone has an opinion on it, but there is a particular overwhelming response being heard all over campus. “I don’t see a point in it. I think I should I be able to take out food that I’m already paying for,” says sophomore Austin Schoenfeldt. He is not alone.

Many wonder what the reasoning is for such strict and sudden rules. Questions pertaining to why it matters and what initiated the big push float around with the previously mentioned opinions. Those who work at SNU Dining have their reasoning, though, and are happy to answer those who question the strictness.

“I do what the boss says,” explains Ms. Barbara. “They have unlimited meals, but the meals are to eat in here. Taking food out is not in policy.”

Students are not merely complaining. They, like those who work for SNU Dining, have their own explanations for their opinions on the new rule. For athlete, pre-med student and senior Makenna Qualls, it is a matter of time — which is understandable for a person of her responsibilities. She explains, “I don’t always have time to just chill in the cafeteria and eat food. Sometimes I take food for later if I know if I’m going to miss a meal.”

Like Makenna mentioned, time is an issue for college students and it creates many other problems. When students don’t have time to sit in SNU Dining and eat, they do one of two things: They will either sneak the food out or simply go without eating. When students do not eat, they will either be hungry (compromising their nutrition) or pay for food elsewhere. However, some students can’t afford to compromise in any way.

Fortunately, Ms. Barbara doesn’t leave one with a “because I said so” reasoning.  She says, “We have had a problem with students going downstairs and throwing cookies and other various foods. That causes bugs.”

The problem lies not in wasting the food that students are paying for but in leaving campus dirty. This causes problems for the individuals who work to keep our campus beautiful and clean. Ms. Barbara reiterates that “it’s a waste and ridiculous.”

Caleb Bechtold, a junior, had similar feelings  to the rest of campus until he heard Barbara’s explanation. He relents, “Well that makes sense. People leaving food everywhere like that (especially the chocolate chip cookies because they are so good) is super annoying. I guess we brought it upon ourselves.”

With knowledge from both faculty and student perspectives, one must wonder what to do next. Andrew Marston, a freshman, has some insight in the area. He explains, “The rule on taking food out of SNU Dining should depend on the item. You shouldn’t take an entire entrée, but a cookie should be fine to take with you.” His experiences and ideas led him to talk about an idea he obviously had been chewing on for quite some time. He says, “I feel like there should be prepackaged meals so that if someone had to run up really fast they could grab it quick and go.”

Despite the slight tension this rule has developed on campus, Ms. Barbara made it clear students have been very cooperative and have not caused her problems through the transition. She says, “All the students I’ve spoken to have given me no problem. The whole of the student body is wonderful. If I ask them to not do something, almost 100% of them listen. The kids are great here.”

[author image=”http://echo.snu.edu/wp-content/uploads/2016/11/Argentina-picture.png”] Sadie Shaull, Guest Writer
Sadie Shaull is a sophomore from Hamlin, Texas and is studying nursing. She has hopes of one day becoming a nurse practitioner and having medical missions be the focal point of her life. She loves being an RA, making new friends everyday, the state of Texas, and holding babies. Sadie has big, tangly red hair and cannot control her volume.[/author]