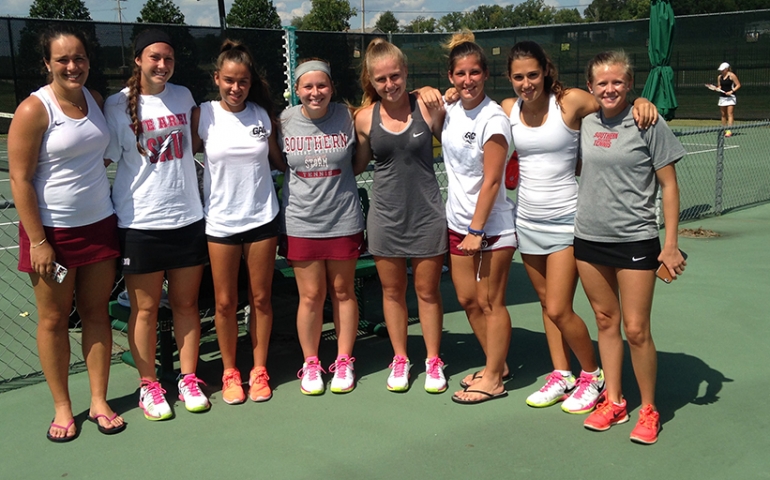 Tennis season is starting at SNU and if anyone is like me, you know nothing about tennis (or sports in general).  This is why I did some investigating.

Why should you go to a tennis match? Wow. What a great question. Here are several reasons.

First, the tennis team has some super cool people on it. Second, tennis is an intense sport to watch because it’s an individualized sport. “They start and they finish,” said tennis coach, Charlie Hibbard. Third, the team has a shot at winning the GAC championship this year. Fourth, the tennis team loves it when SNU students and faculty come to watch their games. Noelia Gomez, junior tennis player, mentioned “If someone is having a crappy day and someone from school shows up to watch us play, it makes us play harder for them.”

As a spectator of the game, it’s important to at least understand the basics of the game instead of shouting “Yay! The score is going up! Good job! SPORTS!”

Scoring: Wow. Buckle up. This is the difficult part. From my understanding, you must win four points to win a game. Next, you must win 6 games to win a set. You must win by 2 sets more than your opponent to win the match.

Étiquette: If you are going to watch a tennis game, you need to know the culture that you will be surrounded by. You must be silent during the play, but once the point is made (you’ll know because the player will stop to pick up the tennis ball) you may clap, scream loud, etc.

Now that we both understand the game a little better, it’s time to test our knowledge at a real tennis match. The first game is at UCO on Feb. 10 at 2:30 p.m.. The next two games are also close to SNU at the OKC Tennis Center on Feb. 14 at 3:00 p.m. and Feb. 28 at 2:00 p.m.. If you have some free time, get a group of friends together to support the team! It’ll be a super fun time. Take a look at the full tennis schedule to make sure you don’t miss a game!