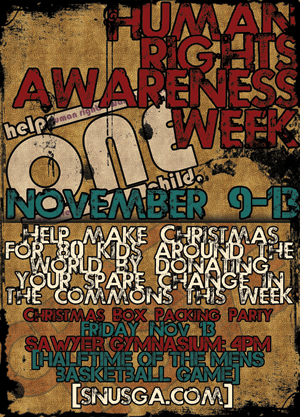 Human Rights Awareness Week (HRAW) is a bi-annual event put on by the Campus Ministries council, and this year’s HRAW will be unlike anything that’s been done in the past.

Twice each year, this event-filled week intends to spread awareness about a subject that is relevant to SNU students. Themes in the past have been issues such as human trafficking and AIDS, but this year’s focal point is homelessness. Human Rights Awareness Week follows Homecoming week and will be SNU’s focus the week of November 12-17.

Jake O’Bannon, SGA VP of Campus Ministries, is heading up the events and partnering with the Imel 2 theme house, “REACH,” to help raise money for their weekly ministry of serving food to the homeless of Downtown Oklahoma City.

This year’s events are sure to get the attention of the student body and get people involved in making a difference in the city. Some events are light-hearted while others are intent on stirring the hearts of the students.

“I would say our goal is to let people know that this theme house exists and to share our passion for this ministry in raising awareness for, and helping, the homeless of OKC,” said REACH theme house resident Jakob Williams.

The events are as follows:
Monday- foursquare tournament
Tuesday- activities at the home basketball games
Wednesday- REACH house will be speaking at different churches
Thursday- prayer chapel worship night at Kingdom Come
Friday- hanging out on the Bracken lawn and sleeping outside
Saturday morning- waking up, pancake breakfast, then making food and going downtown to serve it to the homeless

Williams explained the events’ purpose and what is on the tentative schedule. On Monday, the foursquare tournament is being held to raise money for the food for the homeless.

“Anyone can sign up in teams for a couple dollars per person,” he said.

During the basketball game Tuesday, they are having a “miracle minute.” On Wednesday, the REACH house plans on speaking at different churches about what they’ll be doing that week. Thursday’s Kingdom Come will be themed around HRAW and their ministry and will be a night of prayer.

“On Friday night, we are tentatively (pun intended) planning on a night where we live out on the lawn and there will be some activities like music and a prayer walk,” said Williams.

The next morning will consist of feeding the homeless as the REACH house does normally, but several more locations will be added.

“If anyone wants to get more involved or anything, they can come to talk to me or anyone else in our theme house,” said Williams. “We would love to have them join us.”

For more information on Human Rights Awareness week, contact Jake O’Bannon or any of the REACH theme house residents.

-Editor’s note: To find out more about REACH, check out “Living out the faith and caring for the least of these” in the September 21, 2012 issue of The Echo at echo.snu.edu.