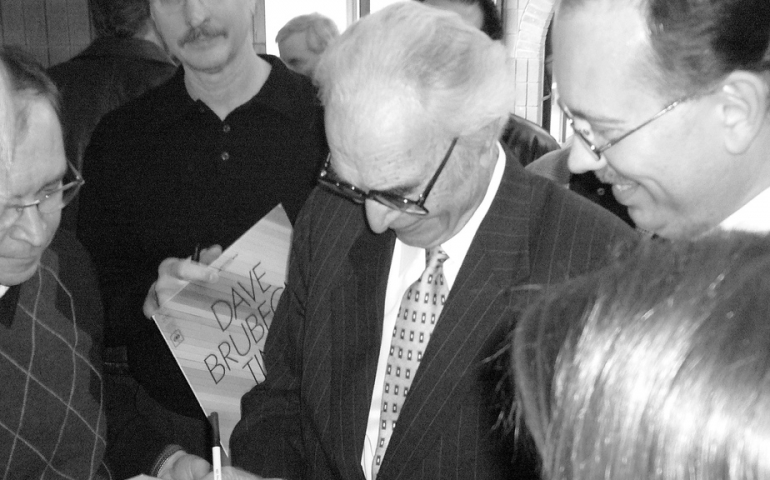 [author image=”http://echo.snu.edu/wp-content/uploads/2016/01/Jessica-De-La-Cruz.jpg”] Jessica De La Cruz, Staff Contributor
Jessica De La Cruz is a junior English major destined for greatness. She’s currently working on world domination plans with her associate, Amy Calfy. However, that has come to a temporary halt until she receives her bachelor’s degree. [/author] [author image= “http://echo.snu.edu/wp-content/uploads/2015/09/summerhoward-authorphoto-1.jpg”] Summer Howard, Editor-in-Chief
Summer Howard is a junior English Education major and Christian romance author from Yukon, Oklahoma. She hopes to one day travel across Europe and have her own personal library. [/author]

It was with much anxiety that I approached Bethany First Church, across the street from the school, to see the Brubecks Play Brubeck concert. I was going to this school event to support several of my friends in choir. I heard about their practices and how constantly tired they were, but I still had no idea what to expect.

However, when I entered the building, I quickly realized how much work had been put into this production. The stage was filled with chairs and music stands and so many types of different instruments. Sitting at the back, I watched people filter in, surprised by the diversity in ages I saw.

The show began with the Brubeck brothers (Darius, Dan and Chris Brubeck) and Dave O’Higgins performing hits from the catalogue of their late father and composer, Dave Brubeck. I was surprised by how accessible the jazz music was, and enjoyed listening to the stylings of each of the brothers and O’Higgins’ solos. The last number, called “Take Five,” was one of the most impressive pieces I have heard, and is considered to be one of the most well-known jazz pieces. What made this number so stunning was the drum solo by Dan Brubeck, whose attention to detail and stunning percussion skills left the audience in awe.

When the second act began, the choir and orchestra, which consists of SNU students, alumni and faculty, entered onto the stage, and I could sense that this act was something completely different. I have very little experience with oratorios or choir pieces, but the concentration on the face of the musicians and singers made the atmosphere change to one of determination. The oratorio performed, “The Light in the Wilderness,” is meant to tell the story of Jesus’ ministry, with a singer in the role of Jesus. The enthusiasm of the performers, both vocal and instrumental, aided the audience in imagining the Bible stories told through song.

While the second act lasted about an hour and a half without a break, the performers did not show any exhaustion, but rather maintained the determination and concentration they had from the beginning. Periodically, the Brubecks would come in with an instrumental jazz break; although it seemed rather odd to me at first, these transitions seemed to be in place to help the listener process the seriousness of the oratorio with lighter music. Overall, the somewhat odd combination of a jazz quartet with a choir and orchestra worked together quite well.

This concert was not what I expected, but it was definitely well worth the time it took out of my evening. It gave me a new appreciation for music, as well as an appreciation for all the hard work the SNU School of Music and world-class performers such as the Brubecks put into their productions.

The School of Music has another event tonight, the SNU Vocal Jazz Festival Concert, at 7:30 p.m. in Herrick Auditorium. The concert is free.

The photo above is used under Creative Commons License. To view the full license, click here.