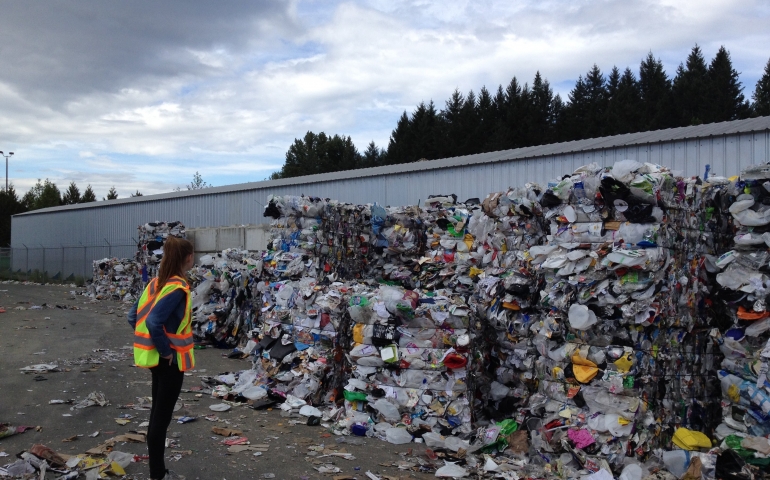 On Southern Nazarene University’s (SNU) campus, many students are gathered from a variety of different places. Some come from big cities, others from small towns and others from the middle of nowhere (like me). With each of these groups coming together, there is a varied understanding of recycling our trash.

For some, recycling is already a habit because it has been made available to them. For others, recycling is an afterthought. I didn’t take on the practice of recycling until I came to SNU a few years ago. In some places, especially in small towns, it’s not a priority, so a system for recycling is not common.

The city of Bethany is no different. The only option for the residents of Bethany is to take their recycling to a nearby center– a place that has varying hours, despite the information on this webpage.

While SNU has made attempts to recycle in the past, without the support of the city, recycling can become expensive and tedious. Previously, there was a recycling bin behind Snowbarger next to the outdoor basketball court; however, over the summer, the bin was removed from campus and has yet to return.

Some say it was removed because trash would end up in the recycling, thus costing SNU more money in fines, but this is an unconfirmed rumor on campus so far.

As many of you may have noticed, there are blue recycling bins next to printers in the library for recycling paper. Joshua Achipa, an SNU Reference Librarian, informed me that various employees take the paper home to make sure it’s recycled properly, sometimes transporting it as far as Yukon. Those bins are taken care of by library employees on a regular basis.

Next to the stairs in the coffee shop, there are wastebaskets labeled “plastic,” “cans” and “trash.” So where do these materials go? It should be noted there is still a recycling bin behind the Webster Commons, but it is only meant for cardboard. Without a recycling bin for materials other than cardboard on campus, where this recycling goes is unknown.

Many students and faculty are concerned about this discrepancy. Last week, I had a conversation with Dr. David Hoekman, Assistant Professor of Biology, who is troubled by the lack of recycling on campus. In an interview last week, he expressed, “It must be a collective decision for the SNU community that ‘this is something we want to do.’ But we should never trick people into thinking that they are recycling.”

Another interesting piece is that SNU has a page called “Green at SNU” on this website claiming that we recycle aluminum cans, paper and plastic– but are we really recycling? Or is the recycling simply thrown in with the rest of the trash? These questions are yet to be answered.

Alex Graham, President of Creation Care Club, believes that “recycling should be a habit that all students should get into at SNU. Habits that we make now are going to last a long time, and if we do not have the means to recycle here on campus, it’s going to be pretty hard to recycle at all. It’s not just SNU students that used the recycling bin behind Snowbarger, but there were so many neighborhood people that would come and use it too.”

This issue is much bigger than SNU– it hurts our community, the city of Bethany and as Dr. Hoekman put it, “If you care about other people in this world, you should be recycling. It is destructive to the most vulnerable on our planet.”

Caring for the earth is bigger than us. Every small choice we make matters, especially knowing where our trash goes. It is Biblical, communal and ethical to care for the earth. So what is SNU as a community going to do about it?

(Photo by Vivianne Lemay on Unsplash)