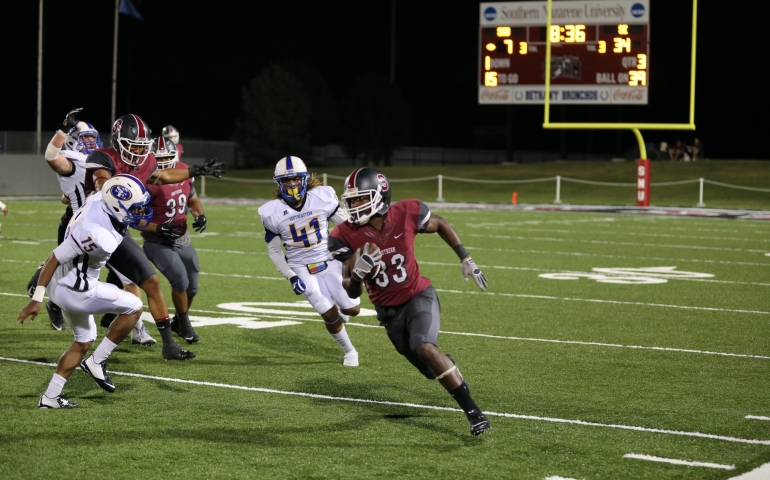 Every college athlete competes at a very high level of performance for his or her sport. They put in hours and hours of practice, training and drilling in order to play their very best. But what happens when the competition gets the best of them and they cross the line of what is acceptable?

“When we are running out on the course, a lot of times we will be bunched up into little groups together,” said Braden Smith, a freshman cross country athlete at Southern Nazarene University. “A lot of times kids will throw an elbow or two at you. They’re not trying to attack you, but just to get ahead and create space.”

Jake Ruter, a sophomore football player describes how for a lot of guys out on the field, they just let the emotion drive them in the heat of the moment.

“Football is a violent sport in general. There’s a lot of testosterone and a lot of energy out there on the field. Occasionally you’ll see some guys let their emotions take over and play dirty with late hits, cheap shots and hitting guys while they’re on the ground,” said Ruter. “But most of the time they’ll just try and get the mental edge; they’ll talk smack on the field and try to get in your head.”

Despite all of this, both athletes agreed that a lot of it is just part of the game.

“When you’re out on the course, you just have to deal with it. The coach isn’t going to do anything, and there’s no one out there to tell. You just have to respect other guys’ space and give them their room. And sometimes, when necessary, you may have to throw a couple ‘bows of your own,” Smith said with a slight smile.

“The rules are a lot more strict and there’s a higher level of respect between players of opposing teams,” said Ruter. “You don’t have hardly any trash talk on social media, and the coaches make sure to discourage their players from doing anything illegal because no coach wants the penalty. You’re held much more responsible for your actions and the referees discourage dirty play with strong penalties that hurt the whole team.”

In Ruter’s experience, keeping it classy in sports is knowing where the line between playing to win and playing to fight is. Otherwise, there are major consequences.

“In football, you do as much as you possibly can up until that line. You hit hard, run fast and try to make each tackle count. But no coach wants you crossing that line because no coach wants a penalty.”

So, the next time you hear about another college’s sports team showing less than respectful behavior to the other team or officials, just remember that most players in the collegiate league never cross the line of poor sportsmanship because they understand the consequences of it.