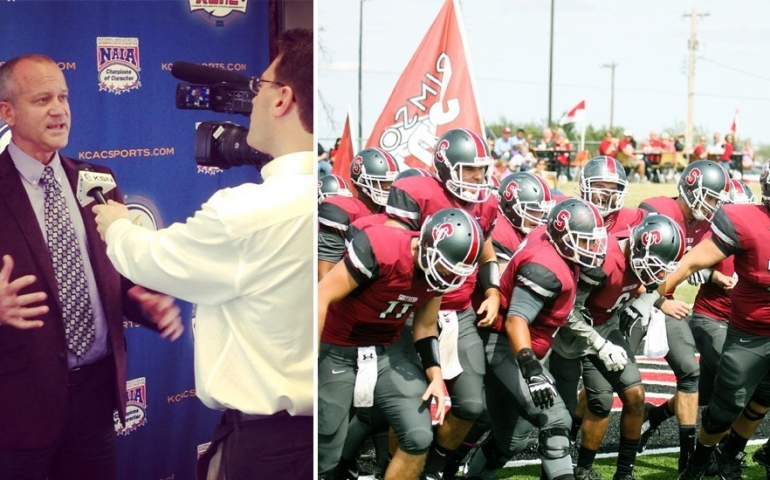 As the football team is approaching spring football of 2016,everyone at the school is getting very excited to see how well the team does from here with the brand new coaching staff. To find out more on the subject, I interviewed the new Head Coach Andy Lambert, who came from Sterling College in Kansas, and senior Dakota Chandler from Deer Park, Texas.

I began by asking Coach Lambert what the transition from Sterling to SNU has been like.

“I have enjoyed the work of the past 50 days or so as much or more than any similar stretch I can remember!” said Lambert. “And I was sleeping on a cot in my office for all of January. The match for me and our staff really seems like a wonderful fit.”

Lambert also went on to brag about the SNU community.

“The kindness, support and patience of the SNU community has been overwhelming. Southern Nazarene University is a fantastic place full of competent, helpful, godly faculty and staff!” continued Lambert. “The student body is impressive and I am more confident each day [that] football can, with time and resolve, build on the rich strong foundation in place here already.”

When asking how signing day went for new recruits, and who he thinks some standout players will be, Coach Lambert said, “The 2016 recruiting class will be awesome as they come in and grow and stay here for the next four to five years. It is hard to speculate on a few guys in the class and their impact at this point in time. Ask me in two years!”

He also commended the current players for their hard work.

“I do want to comment on the vital connection that I believe our current players and new staff are making,” said Lambert. “The players on campus have been hardworking, attentive and a ton of fun. The absolute best aspect of my job so far has been getting to know our own team here, right now.”

There are major differences between NAIA and NCAA Division II football, so after asking what the transition has been like so far, he commented, “The increase in paperwork and pre-approval for different recruiting activities has been the most challenging piece of the NCAA puzzle to this point. I am blessed to have five to seven coaches on our staff with some sort of NCAA Division II football experience and that has helped us accelerate as quickly as possible with recruiting, etc.”

Chandler commented on what his 4 year football experience at SNU has been like.

“[It’s been] awesome; I’ve grown a lot as a person,” said Chandler.

After asking why he chose to come play at SNU when he probably was recruited by some other schools as well, he commented “We had just won a conference championship, and it was a good student to prof ratio.”

Chandler sat out this season due to injury, and he admits it was difficult for him.

“It was tough. It was very humbling though,” said Chandler. “I wish I could have been out there with my teammates every game trying to help us win.”

With the new coaching staff on board, everyone seems to be excited to play under them, and Chandler is no different.

“[I am] very excited for the new start,” Chandler said. “Everyone this season has something new to prove under the new staff, and I think I can speak for all of us that we’re ready to get after it.”

With the team having some struggles these past few season they are ready to go out next season, play hard and prove to everyone they can compete with their conference.