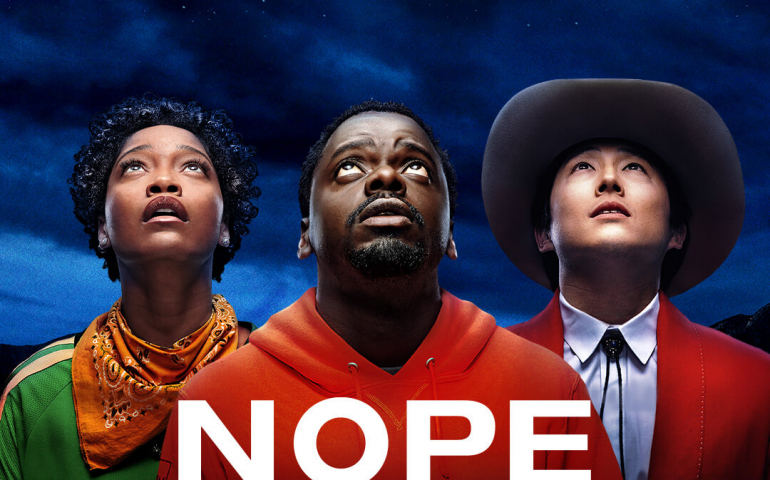 Jordan Peele has done it again with his newest film Nope, which opened in August of this year. Peele is noted for his unique style of filming alongside his edgy and suspenseful plots, and his newest project is no different from the others. This film is an “edge of your seat” dramatic, suspenseful, thriller that will have your attention to the very end. This article will give my honest review of the film, as well as being spoiler free as to not give any of the fun of watching the film for the first time away.

If you are a fan of movies that take your breath away, this film is for you. Throughout the entirety of the film I found my senses heightened, as if my body was expecting something unexpected throughout the movie. I found myself looking over the actors shoulders and tensing for jumpscares or any hidden details. The plot of the movie takes you along this blind path, where whenever you think you have an understanding of what is going on, Peele throws a curveball to throw you off the trail.

I have always been a big fan of movies, and at one point wanted to become a director of my own, so I fell in love with the art of how certain scenes are filmed and the creativity that each individual director brings into their films. Which is why I love Jordan Peele as a director, because just like in his past films such as Get Out and Us, Nope is filmed in a way where the audience is as scared and confused as the characters are within the film.

The actors in this movie did an outstanding job portraying their characters and the experiences that they go through in the story. With Daniel Kaluuya and Keke Palmer taking the lead roles as brother and sister, their chemistry in the film is sublime, really selling the relationship between the two characters.

Overall this was one of the better movies that has come out so far in 2022. I wouldn’t classify this as the best film of the year, but it is up there as one of the better ones this year. The suspense and tension in the film provides for a great movie experience watching this in the theaters or at home on a streaming service. I gave this movie an overall rating of 8/10. The cinematography, plot, and acting were fantastic. However, I thought the ending personally could have been better for the story. I encourage you to watch this movie and see for yourself the magic and suspense that Jordan Peele has made with his newest film, Nope.