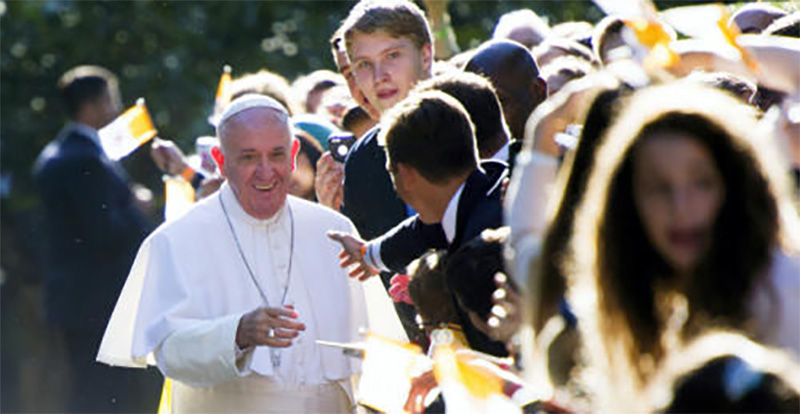 The Pope’s visit to the United States has left me with a myriad of thoughts, hopes and emotions.  I’ve been touched by Speaker Boehner fighting back tears as the Pope spoke on the Capitol steps.  I’ve been challenged by the admonitions to set aside the pursuit of earthly wealth.  And I’ve been inspired by a nation that for at least a moment has become more unified in the pursuit of our better selves. Perhaps what I will find most memorable, however, is a glimpse of Francis interacting with ordinary people pressing in to get a little closer.

The Pope had just finished addressing a gathering at a welcome ceremony at the White House. On his way to his motorcade he made his way to a group of people pressing up against a temporary barricade. As each person pushed toward him, thrusting out arms and hands, he addressed them individually with a simple request, “Please pray for me.”  With one gentleman, he paused a bit longer and added, “Seriously.  I need you to pray for me.”  As I watched this interaction I had one of those moments in my life when the Holy Spirit beckoned me to pay attention.

This is not new behavior for this leader of the Catholics.  Among his first words as Pope was a cry out to the masses, “Pray for me.”  And each time I had heard him say those words before, I was comforted that he would want the prayers of as many as possible lifted up as he fulfilled his lofty position in Christ’s church.  But this time, something else came through and it was a message aimed directly at my own arrogance.  It was a reminder of my own great need.

I think back to the other Papal leaders in my lifetime.  I have images of them working through a crowd, making the sign of the cross as they offered a blessing to those seeking something more as they journey through life.  Here, however, is a man saying, “I too am in need.”  Here is the chosen leader of the largest group of believers in the world.  Here is the one with the apostolic lineage tracing all the way back to Saint Peter.  Here is someone declaring himself to be a sojourner.

I had a conversation with a friend who has been a Christian for about a decade.  He has a wonderful testimony of overcoming addiction and he has helped so many others who share similar struggles.  He told me that he loves his church and thanks God for the people there who welcomed him with open arms and who taught him about being a disciple of Christ.  But he also told me it’s hard on him sometimes because he feels like these same people offer constant reminders that he’s much newer to the kingdom and must keep his place in line.  His words indicted me and I realized that I am one of those who, having been brought up in the church, think myself to be further ahead on the journey.

When I read the account in the New Testament of the disciples arguing over who will be greatest in the kingdom, I easily dismiss their story as being an extreme case of arrogance and selfishness.  But how many times have I thought myself to be more special in God’s eyes than another?  How many times have I felt more worthy to enter the Holy of Holies that no longer has a veil to pass through?

How many times have I told someone struggling, “I’ll pray for you”?  But have I ever been vulnerable enough to acknowledge that I need those prayers myself?  I don’t need them more than you do, but I also don’t need them less.  I’m not ahead of you and I’m not behind.  I’m just a sojourner.

There are so many efforts being made to use the words of Francis to support whatever human cause we might champion.  He will be both praised and ignored by those at every spot on the political spectrum.  But for today, I’m going to choose to pray for him and ask that you might pray for me.

[author image=”http://i0.wp.com/echo.snu.edu/wp-content/uploads/2012/08/jim.jpg?resize=200%2C200″] Prof. Jim Smith, Echo Faculty Advisor
Prof. Smith is a professor of Mass Communication at SNU where he has been on the faculty for 24 years. His greatest passion is seeing students develop and grow passions of their own.[/author]