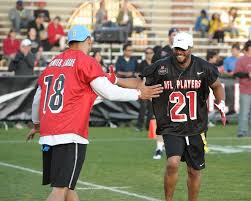 Pros vs Joes, a new SGA event that pitted student athletes with their non-teammate peers in a variety of sports, took place on April 8th. The Southern Nazarene football players played in a friendly competitive 7 on 7 flag football game against the local students on Bracken lawn last week. Understandably, the football players were the Pros while the other students who signed up were the Joes.

There was a lot of hype leading up to the game; the Joes were excitedly talking smack to the Southern Nazarene football players about how they were going to win.

The Pros won the coin toss; therefore they would receive the ball first. They started the game off with a full field bomb from the team’s middle linebacker Michael Hicks to the quarterback Alec Fallo. The entire football team was jumping around excited and hyped; they also converted their extra point.

When the Joes received the ball they returned the favor with a quick touchdown by their quarterback Ian Hardman on a 4th ball over or score and they scored on a quarterback sneak but they did not convert their extra point conversion. Hardman, although a Joe now, plans to join the football team this summer as a quarterback.

After their touchdown, there was no competition. The football team seemed to be real pros compared to the students.

The team’s kicker, Ross, caught an interception and took it back for a full field touchdown. The entire team chased him down and celebrated with him.

Bryan Moss was the games ‘Most Valuable Player,’ ending the game with a total of three interceptions and two touchdowns while also throwing two extra point conversions passes. Bryan is a starting freshman wide receiver, who transferred from Arkansas Tech. After the game, he said, “I told the team to just give me the ball and we will win.”

Junior college transfer wide-receiver DeWayne White also showed his skill throughout the game. White ended the game with two interceptions. He scored on one and also scored a touchdown from offense while making two defenders miss.

Demo Johnson was the star for the Joe’s team; he worked hard to get open and gained plenty of YAC (Yards After Catch) throughout the game but that was not enough. He accumulated over 8 catches but was held to zero touchdowns. The score ended up being 49-6.

After the game, both teams were supplied with pizza and bottled water. The players from each team looked as though they had enjoyed the game. They were joking around, laughing and having great sportsmanship. The Pros vs. Joes event allowed the players to become closer with their teammates while also bonding with their fellow students.