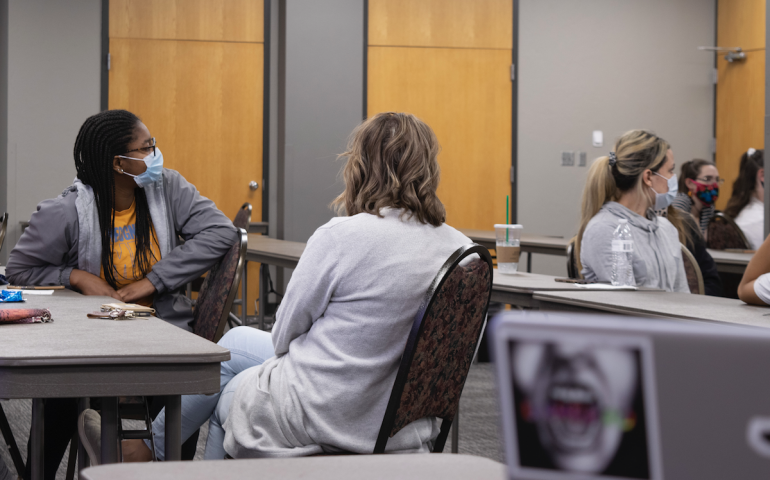 Monday, October 5th, in the Heritage room, SNU hosted a red table talk to discuss topics surrounding Hispanic/Latinx heritage. September 15th through October 15th is National Hispanic/Latinx Heritage Month, and so for several weeks there have been and will be events like the red table talk to celebrate. SNU alum Liliana Reza spoke via zoom about subjects like the importance of language, heart language, code-switching, and knowing your family’s story.

Reza wanted to use this opportunity to talk “about what it means to live embracing both my cultural identity and my spiritual identity.” From a cultural standpoint, Reza refers to herself as a first-generation Mexican-American. She was born in the United States, but most of her family was not.

She named Spanish as the language of her heart and placed a great emphasis on language throughout her discussion. She encouraged everyone in the room to learn another language, particularly if your family speaks something other than English. A good reason for this, she states, is that when people tell stories that mean a lot to them they tell it in their heart language. So if you want to be a good listener, which should be the goal when asking about something like your family’s history, being able to converse with them in their heart language is beneficial.

In regards to her spirituality identity, she wanted to mention how wonderful it is “to experience worship and other spiritual practices in different languages.” That sentiment was shared with many in the room, as some spoke up to offer worship songs that just tugged on the heart or were more beautiful in another language. She also added that it is marketable to know more than one language.

One of the last points she spoke on started with a question: “Do you know the story of your family?” She believes that it is paramount to know where you and your family come from because, as she put it, it gives an indication of where God is sending us. This circles back to being able to communicate with your family so that you get the complete image of the narrative they give you. Reza says that “those stories can then be markers of God’s grace.”

After Reza finished, Jocelyn Gordon, who is the Director for Intercultural Student Engagement, acted as a mediator and gave prompts and questions for the room to discuss in smaller groups. The space allowed those who wanted to speak the opportunity, and members of the SNU community talked about a multitude of things. Many agreed that though they spoke English, they would say that their heart language is something else. This went along with the unanimous agreement that worship and prayer can be a fantastic experience in a language like Spanish.

Several people spoke about their experience of being the first person in their immediate family to get a higher education and the pressures that go along with that. The unfortunate nature of code-switching was also brought up. Code-switching, if you are not familiar, is when one switches between languages or styles of speech depending on who they are talking to and where they are conversing. The search for a sense of belonging was a common theme throughout the red table talk.

Though Hispanic/Latinx Heritage month ends this week, you still have an opportunity to get outside your comfort zone and get to know your SNU community better. This Thursday, October 15th, Kingdom Come will focus on Hispanic/Latinx heritage month and will have worship presented in Spanish.