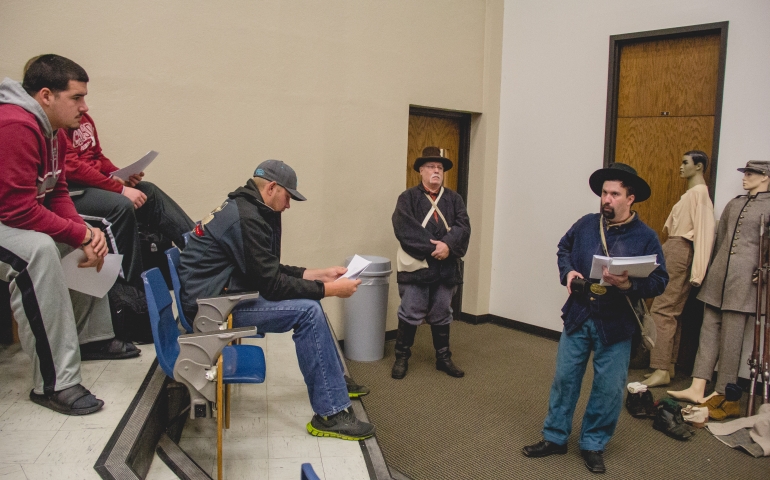 On Tuesday, February 17th at 11:45 am, several Civil War reenactors set up a traditional Union campsite in “The Pit” of the Don Beaver science building. They answered questions students had and sparked many conversations about the life of soldiers during the Civil War. Dr. Heather Clemmer organized the event for her Civil War and Gilded Age class, but others were in attendance. The presentation included a traditional Union campsite, customary army uniforms, bayonets and several types of rifles.

In this, the 150th year since the end of America’s bloodiest and most costly war, the recognition of black history month and a couple weeks after Abraham Lincoln’s birthday, this opportunity came at an ideal time.  Students joined in the remembrance of a great American tragedy and learned from those who know much about the time period. Josh George, a student here at SNU said, “I think it’s awesome. It’s very important for young minds to be exposed to this part of America’s history.”

The Civil War pitted the Union against Confederacy, Northerner against Southerner, brother against brother, American against American. At the end of the four-year war there were over 600,000 American casualties, more than a combination of all previous wars. It also brought huge strides towards racial equality and the civil rights movement, through the Emancipation Proclamation of 1863 and the ratification of the 13th Amendment in 1865.

There is also a great deal to say about the leader that guided the country through its internal turmoil. Though hundreds have written about Lincoln and the Civil War, Eric Foner, Professor of History at Columbia University, believes they are still relevant. He said, “Lincoln’s life illuminates persistent questions of American history: obviously, the question of race, the role of the government, the role of presidential leadership, of social mobility in our society—all things he experienced in his own life” (The Record).

Over time, history loses neither its validity nor its relevancy, and the reenactors emphasized that. America’s history is vibrant and captivating with a fair share of blemishes. What has frequently astounded me though is just how well American society picks itself up, regroups and learns from its failings. These words from Lincoln’s second inaugural address express the American outlook perfectly: “With malice toward none; with charity for all; with firmness in the right, as God gives us to see the right, let us strive on to finish the work we are in; to bind up the nation’s wounds; to care for him who shall have borne the battle, and for his widow, and his orphan—to do all which may achieve and cherish a just, and a lasting peace, among ourselves, and with all nations.”

Check out photos from the event:

[author image=”http://echo.snu.edu/wp-content/uploads/2014/01/IMG_2377.jpg” ]Alina Scott, Staff Photographer Alina is History and English major here at SNU. She is originally from Belize, C.A. and loves reading books, studying history, and all things Abraham Lincoln. She has worked as a US History tutor and, after grad school, plans to become a college history professor.[/author]