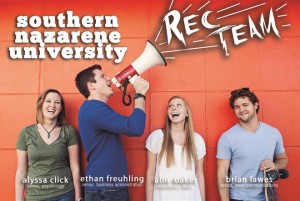 In a word, SNU Crew is, “Exciting!” according to Shelby Oxner, junior. Oxner was a part of the SNU Crew Recreation team last summer, along with seven others.

The SNU Crew recreation teams travel together throughout the summer, providing the fun at camps at several different locations. Camps can include anywhere from elementary-aged kids to high schoolers.

According to Courtland Park, who coordinates SNU Crew teams and works in the office of admissions,  “The Recreation Team represents SNU and the Office of Admissions at churches, retreats, and camps across the South Central Region.”

The teams interact and build relationships with the campers while providing entertainment and promoting SNU. Students can expect to be leading games and events at the numerous summer camps that Nazarene districts hold.

“Doing SNU Crew my freshman summer was one of the best summers of my life,” said Oxner. “It presented opportunities to not only grow spiritually and as a person but IT WAS SO FUN, too! The Lord set the stage for us as a team and we were able to build relationships with teens that we found we needed more than they needed us.”

Although being a part of the SNU Crew involves a lot of high-energy tasks, many personality types are perfect for the job. Park, who was also on the recreation team when he was a student, didn’t necessarily fit the stereotype for the job, but still considers it one of the best times of his life.

“I was on the SNU Crew for two summers and I would firmly place myself in the introverted category. I like to think that I was good at it,” said Park. “In reality the important thing is that you are able and willing to build relationships with Sr. and Jr. High Students at camp as well as have a passion for SNU. That’s what counts.”

Applying is simple. Applications can be filled out online and you will also need to have two character references filled out by faculty, staff, or employer. Once you have finished filling out your application, there will be a link for you to sign up for an interview time.

Oxner breaks it down by providing three reasons someone should apply for SNU Crew.

One, “It is such a unique way to serve and be used by God that will stretch you more than you can imagine.”

Two, “You get to meet the COOLEST teens and kids!”

And three, “It’s the funnest!”

If you aren’t convinced of how much fun it is, Park speaks from experience.

“SNU Crew is probably two of the most fun summers I’ve ever had,” Park said. “While it is work, you just can’t beat being at camps for the entire summer. Getting to lead games and be counselor/mentor to the  students in the South Central Nazarene region is immensely rewarding.”

“It was such a unique experience of growth, excitement, fun, exhaustion, and dependence, not only on your team but most importantly on the Lord. I wouldn’t trade it for anything,” Oxner concluded.

Anyone who is interested in being a part of the SNU Crew Rec. team can apply online by Friday, March 29 at 5pm.