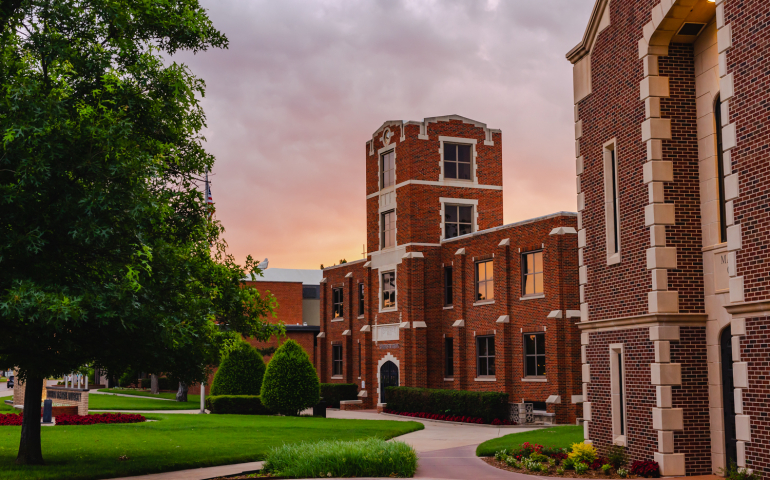 President Dr. Keith Newman, along with Brad Moore and Troy Rhodes, spoke on October 8th, unveiling the outline of a new five-year-plan. The meeting lasted for about an hour, involved a Q&A at the end, and discussed the proposed changes to SNU’s campus.

Moore began the presentation by explaining the reasoning behind some of these changes. There have been 32 buildings constructed on SNU’s current campus, and of those locations 17 of them are still currently in use. Having contracted out a service to evaluate the usefulness retained in many of these older buildings, Moore informed the audience that it was their decision to remodel and reconstruct many of the buildings on campus.

“You don’t want to stick with buildings that you just keep throwing good money after. You just don’t keep investing in things that’s time has come,” said Moore.

The plan involved adding three new buildings, with a plan to construct new student housing and academic buildings, as well as creating the addition of a prayer chapel. Four buildings are slated for remodeling, those buildings being Royce-Brown, Broadhurst, Bresee, and parts of the library.

The plan also includes the remodeling of outdoor spaces for students, such as quads, pathways, and a campanile. It also involves making College Street less of a street and more of a pedestrian walkway, and includes a vision for pavilions and outdoor gathering spaces better suited to student needs.

Dr. Newman, when asked to elaborate on aspects of the plan, had a lot to say in terms of his excitement about the project. “I look forward to seeing the ways the campus transformation plan will allow us to better serve students, staff, faculty, alums, and our community,” said Dr. Newman.

While the plan does promise exciting new advancements on SNU’s campus, such a change does take time. When asked about what buildings might take priority and when students can expect to see some of those changes, Dr. Newman explained, “This project will take several years to plan and then construct so no time schedule has been established.”

“A newly appointed committee of our Board of Trustees will be working closely with the SNU Administration to establish the priorities,” said Dr. Newman. “We believe flexibility, adaptability, and functionality will be key components of any planning.  Lots of individuals will have the opportunity to speak into the planning process so that we create an intentional plan that allows for future growth and serves our community well.”

He did, however, say that, “We do anticipate that the academic building will be a high priority in this planning process.”

“We want to create a living experience that gives consideration to a number of possibilities:  exercise facilities, food service, coffee shop, even classrooms are spaces to be considered in a new residence hall,” he explained. Many of these improvements, particularly that of the outdoor gathering spaces, were very exciting to him. “Community gathering spaces are especially important to me.”

The prayer chapel, which was only lightly explained during the presentation, was given more context in the interview with Dr. Newman. “The great news is that we have a heavenly Father who allows us to call upon Him from anywhere and at any time,” he said. “A beautiful Prayer Chapel will send a powerful message to all who walk this campus about our priority of putting God first in all we do and provide us with a consecrated place to ‘be still’ and ‘be quiet’ in the midst of a busy and noisy world.”

With all of these anticipated changes, many of them very costly, it raised a question as to whether or not it might impact tuition prices. However, Dr. Newman confirmed that this was not the case. “There’s no planned impact on tuition,” he stated. “The campus transformation plan will require major fundraising from friends of the university, alumni, and foundations.  We will seek to limit any additional debt for the university so as not to impact future generations of students and their  families.”