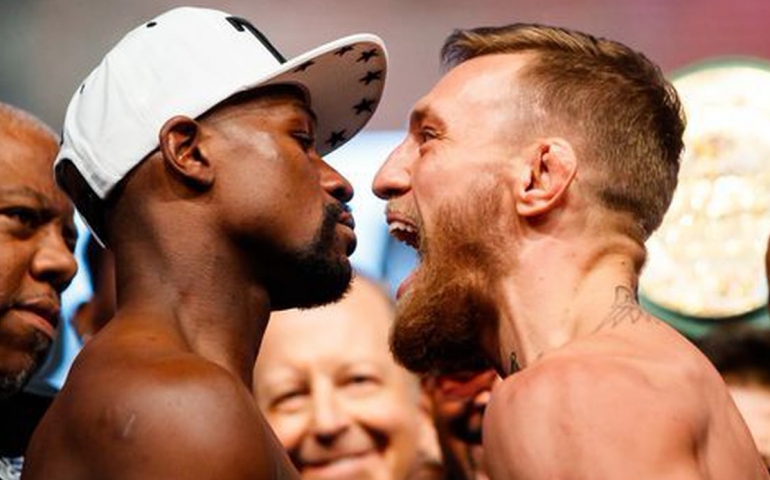 Southern Nazarene University’s football team bridged the gap between students and athletes on the night of August 26, bringing people of all majors and interests together to support a common cause, the legendary fight between Floyd Mayweather and Conor McGregor.

To learn more about how the boxing match grew into a campus-wide event, I interviewed Andy Lambert, the Head Football Coach here at Southern Nazarene University (SNU).

“I had a couple of guys ask me if I was going to be showing it at my house, which prompted my search to see if anybody was showing it on campus,” Coach Lambert stated. “I wanted to have this service available to my players… and then I thought, ‘You know, we have enough room for anyone,’ so that’s when I invited everybody.”

Coach Lambert goes on to explain that this event sparked the idea of having a “campus crossover” of student athletes and the rest of the student body. He put a strong emphasis on the importance of getting football players involved with the student body, recognizing the setbacks of having the football facility off campus.

“Even in chapel, people tend to sit in their own groups,” Lambert emphasizes. “And that was part of the intention of showing this, to say, ‘If we could get some people who aren’t football players to come down, that would be awesome.’”

Although he feels as if it were a failure of an event, as the streaming service crashed before the main event started at the fieldhouse, the end result was a success as over 200 students showed up to the fieldhouse. After the crash, many students moved to the Bud Robinson Room to watch Floyd Mayweather defeat Conor McGregor, cheering on each contestant as one student body.

Even though it wasn’t located at the fieldhouse, student athletes and the student body came together to celebrate Mayweather’s historic victory. Macy Smart, an Education major at SNU and a Conor McGregor enthusiast, explained the atmosphere and community surrounding the fight:

“It was crazy. It was like being in a bubble, where you know people around you are screaming but you’re so focused you can’t feel anything around you… Sports have a tendency to bring people together. I saw people there that I’ve never seen in my life, and it really bridged the gap between someone like me, who loves sports but isn’t super involved, with the student athletes.”

Although the fight itself is a once-in-a-lifetime opportunity, Coach Lambert expressed to me his interest in creating more events like this, whether it’s showing a movie, a game, or hosting post-game parties in the fieldhouse. By showing the legendary boxing match, the football team has opened the door to new opportunities to develop a strong community on SNU’s campus.