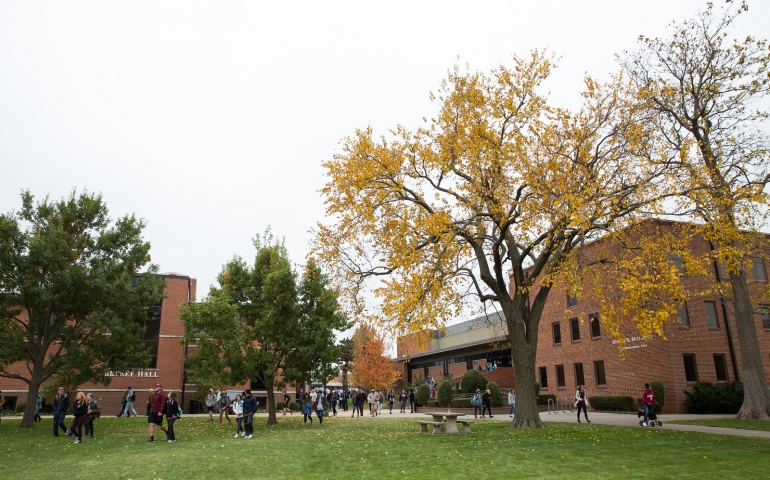 So you might have heard that there have been some changes in the Office of Student Life, more specifically, someone new was hired as the Director of Student Engagement. So who is Dannah Stelting? Is she the New Marian?

Dannah Stelting is an alumni of Southern Nazarene, she graduated in May of 2016 with a degree in education. While she graduated after four years at SNU, she completed her coursework in 3.5 years, taking her final semester to be an au pair in Italy, and returning in May to graduate with the rest of her class.

While at SNU, she was the President of Sigma Alpha Pi leadership honor society, was in University Singers, Chorale and also served as a class officer in Student Government for three years. Dannah recently married, Tyler Stelting, another SNU alum.

When asking Dannah about her new job at SNU and what it has been like coming back, she said, “I feel so fortunate to be blessed with the opportunity to come back to SNU. Because this place meant so much to me as a student, I am passionate about engaging students in campus life.”

Dannah took over the position of Director of Student Engagement in January of this year. The position was previously held by Marian Redwine, who is now the Associate Vice President for Student Life. Marian’s new job is to oversee the Office of Student Life and the Commons.

Marian Redwine has worked for the school for ten years, also an SNU alum herself. When asked what her thoughts were on

Dannah taking her previous position, she replied, “More than 20 people applied, as we went through the candidates, it was clear that  Dannah had a deep passion for the student experience, because she is a recent grad and has worked in our office and was a part of student government,”

Marian went on to say, “we knew what kind of person she is, we knew she could be trusted, we knew she would lead student life in a way that would support what the institution would need and that she would be a solid addition to our office.”

Dannah has already shown her initiative for this new role by changing up the process for the SGA Executive Officer positions.

As the new Director for Student Engagement, Dannah will be over Student Government as well as overseeing all student events throughout the year.