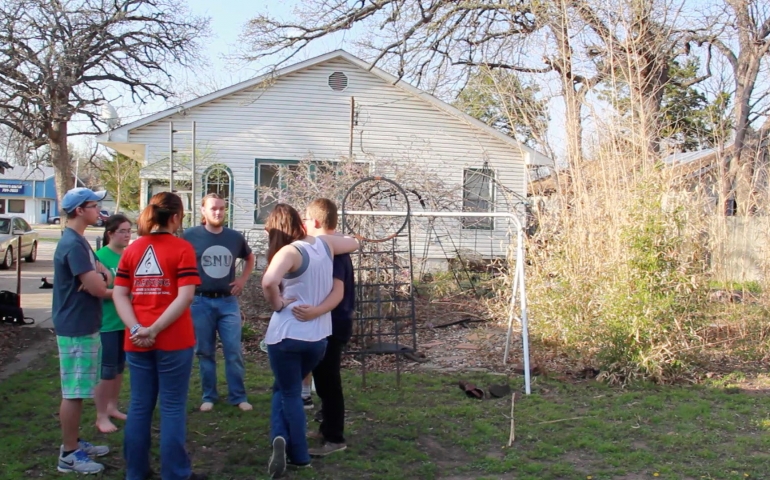 Not too far from SNU, in the backyard of a nondescript house, a new kind of ministry is forming. It’s called The Ring, and it’s centered around, of all things, sword fighting. While the swords are made of plastic, the sport proves to be a fast-paced and energetic activity. The group was founded by freshman Trevor Luinstra, who wanted to create a unique club with an emphasis on fellowship and playfulness. With a laugh, Trevor said that the group allows members to “beat the tar out of each other in the name of Jesus!”

Meetings begin with the members in a circle, with each attendee either telling the group either a praise they have for something good happening in their lives or a prayer for something difficult going on. Once prayer concludes, the group sits down to read and discuss a chapter of the Bible. After that, the fun begins.

Despite the images that come to mind of action heroes wildly swinging sharp blades with one hand behind their back, sword fighting requires both knowledge of many techniques and very fast reaction times. Luckily for new members, knowledge of sword fighting isn’t needed to have fun at The Ring. When someone without experience attends a meeting, members work to give them the basic skills needed to be successful. After that, the rest must be learned through practice and experience.

“As a new member, they teach you how to block, mainly, and they’ll show you how to do a few strikes,” said Misty Belflower, a regular Ring attendee.

Battles are fought with plastic blades, but that doesn’t mean injuries aren’t possible. For example, when the group started, many members were being repeatedly hit on the hands. This resulted in a match’s premature end, as one can not fight effectively without the use of his/her hands. To remedy this solution, a group member started bringing lacrosse gloves to use during matches. Despite the accidental bruises sword fighting inflicts on students, the activity comes from a place of love and mutual respect. As student Sarana Redwine articulates, “It’s whenever you’re fighting with another person that you get to know them.”

As for the future of the club, the possibilities are endless. The group plans to meet until the end of the semester, then begin again this upcoming fall semester. Trevor hopes that the group will continue to stay close and even expand in the coming months.

“I see bonds of friendship… coming together even tighter,” he said.

With it’s unique style and tight-knit camaraderie, it appears that The Ring is a club that will trek forward into the future, with no chance of slowing down.

For more information about The Ring, contact Trevor Luinstra (treluins@mail.snu.edu).