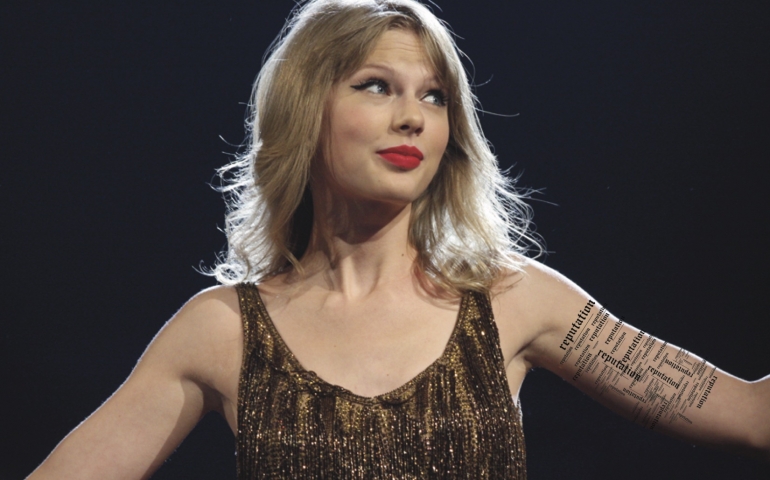 Reputation: a widespread belief that someone or something has a particular habit or characteristic.

Taylor Swift. What a reputation she has built since she was fifteen believing it when some boy told her he loved her. The country queen teen dream turned to popstar has made sure no two albums have been alike since her self titled album release in 2006.

In many’s opinion the transition started with her album Red, further more in 1989, and then on November 10, 2017 she blew our minds with Reputation.

I talked to Trista LeGrande, a “Tswifty” follower and expert of 11 years, about her feelings towards the new album.

“I think it’s definitely different than her other albums. But, a good kind of different. Her albums have changed over the years, but she still had one classic ‘in your feels’ ballad, called “New Year’s Day” so I’m happy.”

“The new album is a joke. She’s taking the stereotypes people place on her in an effort to say “If this is who you think I am, this is what it would look like.”

Brooke also added that there is no way she created this album in seriousness. “My theory is that Taylor is trying to send a message with the lack of quality in the lyrics and mainstream content, to say that is exactly who she is not.”

Trista’s favorite album is Red, which came out her freshman year of high school. If she ever got to talk with Taylor in person, she would tell her what absolute lyrical Einstein she is.

Brooke adores Taylor, especially because she is a musician herself. “I always expect so much more from her because she writes and produces all of her songs so beautifully.”

According to the Washington Post, in just 4 days, she sold a whopping 1.05 million copies of Reputation, meaning that this traditional album has sold more copies than any other release this year.

As you can see, Reputation has received mixed reviews to say the least. Some believe she’s going off the deep end, while others think she’s never been better.

We’ve seen her petty side come out in most of her albums, but not quite as strongly as it is portrayed in this album. For instance, “Look What You made me Do” is a direct reference to her feud with Kanye West and Kim Kardashian. “I did Something Bad” seems to be a reference to the previous mention plus her exes Calvin Harris and Tom Hiddleston. Honestly though, would it really be a Taylor Swift song if she didn’t call out her exes?

The purpose of music is to tell a story, and Taylor has always been a sort of Shakespearean-novelist in the way her lyrics are composed.

In my humble opinion, whether you’re diggin’ the new tunes or wishing she’d go back to “Tear Drops on My Guitar,” there’s no doubt in my mind that good ole Taylor is one of the best of all time.