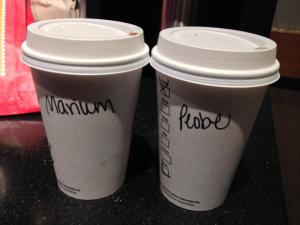 Our names and nicknames are in many ways the source of our identity. Whether you hate or love your names and/or nicknames, the power to choose what you will be called is a privilege that many people get to experience at some point in their lifetime. For SNU students, the legacy behind names/nicknames is no different.

“My parents always wanted to name me Grace,” senior Grace Williams said. “But they named me Sandra Grace after my grandma at the last minute, fully intending to call me Grace.”

Williams, the 2014-2015 Echo editor and Honors student, has always liked to be called Grace. Using her middle name as her preferred name, however, has some drawbacks.

“It is annoying to have to say ‘Sandra Grace Williams’ for any legal or medical matters,” Williams said. “People are always asking, ‘Why did you tell me your full name?’ I never know how official things are and which name they have, so I give them my full name.”

Not surprisingly, Williams is not the only one on campus who goes by her middle name. Many students will answer to both their first and middle names.

“My first name is Corbyn and my middle name is Mattie,” said junior Corbyn Holliday. “But people refer to me as both.”

For people like junior Catherine Roby, however, the name issue is a more complicated matter than being called by her first or middle name.

“My parents nicknamed me Cathie,” Roby said. “I really don’t have a preference on what people call me if they know me. But I don’t really care for strangers calling me Cathie.”

Roby, a transfer from Rose State College who lived for a time in Indonesia, has numerous nicknames.

“ ‘Gajah’ is the nickname my brother gave me,” Roby said. “It is Indonesian for elephant. He started calling me that because I stomp as I walk; he finds it funny that I’m rather small but make a lot of noise while walking.”

Both Williams and Roby can definitely agree on one thing regarding names versus nicknames: nicknames can dispel confusion.

“I think nicknames are great to distinguish between people with the same name, “ Williams said. “I have three friends with the name Amy and it can get very confusing.”

So remember: if you ever decide to change your name or possess the power to name somebody else, think about the issues a particular name/nickname might cause.