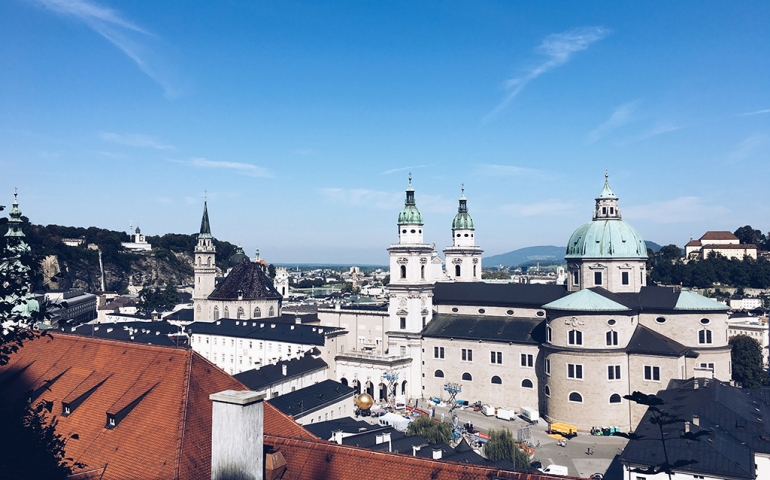 This semester, SNU has several students who are studying abroad. When In Austria is a new segment that will highlight the experiences of students who are learning to live in an entirely new place.

My name is Caleb Siems, and I am from the USA. I lived in Oklahoma and have 11 siblings (yes, that is 12 kids). I love chocolate and I LOVE Austria!

In this short series, I will attempt to give an idea of my experiences studying abroad in Vienna, Austria for the fall semester of 2016. This will act as a summary and an examination of my experiences, with a little humor dribbled over the top.

Admittedly, I went to Austria for two weeks in 2014 for a music festival, but that was nothing compared to the three months I will be spending in Europe this year.

Studying abroad is very different from what I initially thought it would be. So far, I’ve been to London for three days, traveled to Salzburg, and experienced the wonder of gelato.

While I expected to see only differences, I have instead seen many similarities, including an Aldi’s (called “Hofers”); numerous Starbucks (now so expensive even I could not rationalize buying a Pumpkin Spice Latte); and hundreds of glaring, sullen pedestrians (smiling in Austria is the equivalent of someone in America screaming their Twitter handle in the middle of the street). I’ve found myself continually drawing comfort from these similarities, because they helped remind me that things are not as strange as they could be. There will always be annoyed and angry-looking people no matter where you go. Plus, tourists are currently frequenting the country, so we’ve had plenty of run-ins with fellow Americans.

(Seriously, we ran into a couple from South Carolina at a train station in Salzburg. What are the odds?)

However, numerous differences do still exist between America and Europe. Not least among them was a 5 year-old boy who took his pants off in a museum and strolled around like he and his underwear owned the place. And that was just on the second day in London (where I unfortunately did not manage to get any tea or see the Queen).

The public transport is also an experience all on its own, but ultimately it helps to bring you closer to the people of Vienna. Along with all the body odor that comes with them in these final days of summer (Fun fact: Men here either wear a LOT of cologne or not enough).

Not everything has gone smoothly, so far. For example, when we arrived at our rooms late at night after a day of traveling from London to Vienna, I discovered that my room was already occupied by two guys. Turns out the guy who was supposed to be my roommate invited one of his friends to stay with him. So, after much confusion, I was placed in another room (with a great roommate).

Then, to top it all off, we discovered that for the first time since the program started, the students had not been given any bedding. This meant that those of us who had not brought bedding had to spend the night improvising with what we could find (Jackets are not meant to be pillows).

We have (so far) survived such inconveniences and have come out stronger because of them. I doubt our stress levels have lowered, thanks to three hours of German class five days a week, but no one has died yet, so I remain positive.

Truthfully, I am very excited to see what comes next on this trip. As a I write this, our group has already bought tickets to Prague for a short weekend trip, and my music professor has already used swear words in a lesson. Plus, I am required to see musicals, operas, and concerts. In Vienna. FOR A CLASS.

How neat is that!
p.s. Long hair is annoying to travel with.