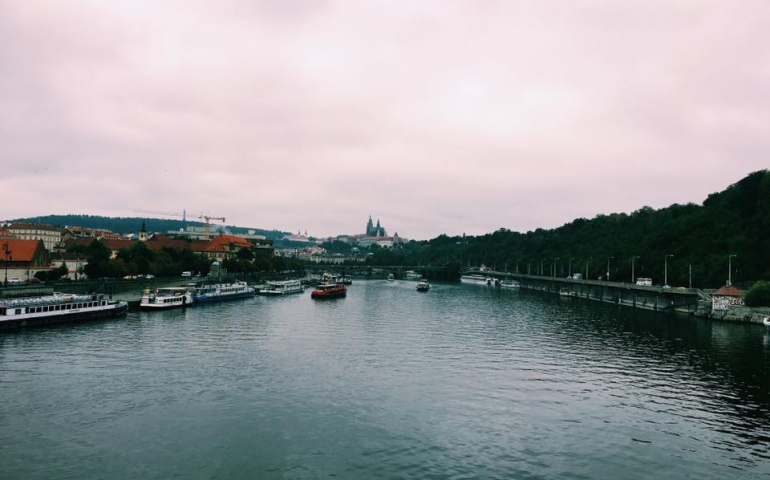 A lot has happened since the last time I wrote.

Bed bugs, mostly, but I’ll get to that later.

We have officially entered the month of October, here in Vienna, and the weather has taken the hint with a vengeance. It’s gotten quite cold here, a nice change from sweltering heat, but the beginnings of frostbite are not making things easy. Pumpkins are beginning to pop up in the stores, and I’ve spotted numerous cat ear headbands that are sure to send teenagers into a frenzy. I keep forgetting that Halloween is around the corner, but I am still planning on carving a jack-o-lantern. Or at least buying a bag of candy that I can eat all by myself.

(I may or may not have done this already.)

With the cold setting in, there is a rise in demand for hot drinks. Sitting in the first session of our Refugee and Immigration class, a mug of hot tea was perhaps one of the most beautiful things I have ever experienced. I still haven’t worked up the courage to waste money on a Pumpkin Spice Latte, but I can feel my iron constitution weakening so I am hopeful. Fun Fact: Here in Vienna they serve coffee drinks in actual mugs — even at Starbucks and McDonald’s.

I had to return to the States a week or two ago for a family emergency, and let me tell you what I was reminded of: WALMARTS ARE AMAZING. Seriously, you can find anything at Walmart for a relatively cheap price. They weren’t kidding when they said you don’t know what you got until it’s gone. Stores here in Vienna are significantly smaller, but there are a lot more locations. You may not be able to find Cheerios cereal at a Spar, but dang if you can’t find a Spar on every other corner. Thankfully, this has helped keep my spending relatively low, due in part to the absence of Cheerios, but I still have a bad tendency to buy more snacks than I need.

(Apparently, I’m the king of snacks regardless of the continent I’m on. )

Also, my trip back to America has reminded me of how much people in the States smile. My face started hurting after one day. Plus, everyone in Austria dresses significantly nicer than Americans. We should probably work on that as a society.

(I saw more ugly t-shirts and cargo shorts in the Atlanta Airport than I have during my entire stay in Vienna.)

We have regrettably run into some problems abroad, the most pressing of which I will address first. The most important, beautiful, and life-giving essential in the life of a college student has been ripped from our grasp: The wifi is out. First, Catie and Rachel lost it. Then, so did I. Then Luke. As of this writing, only the Mady/Danielle and Savannah/Baylor rooms still have access to the world wide web, and the latter is the only room with wifi. My Twitter has suffered as a result. I’ve only posted one picture to Instagram. My snapchat is a joke. HOW AM I SUPPOSED TO SURVIVE??

(I have taken to shiftily hanging out outside of Savannah and Baylor’s room to steal their wifi and check Facebook, and I am positive the people on their floor think I’m stalking them.)

A few of us have decided to visit some other countries while here in Vienna, and two of our members visited Paris a few weekends ago. They brought back memories, souvenirs, bed bugs, pictures, and hilarious stories of their Parisian adventures. Most of those things they will treasure forever. The third one they likely don’t want to remember ever having happened. Turns out, when people bring bed bugs into a room it’s like inviting a freshman into your dorm. It starts out with one, but suddenly you find yourself surrounded by people who clap every time someone drops something in the cafeteria.

(Freshmen please stop doing this. It’s embarrassing for everyone)

Below is a paraphrased quote from one of the survivors:

As a result of this bed bug infestation, several people had to relocate temporarily so that their rooms can be bombed, and a great deal of clothing/sheet washing has taken place. Not to mention, we have to pay 2.50 euro for a wash and dry cycle. The SNU laundry rooms have never sounded so appealing. Tensions are high at the moment, spurred on partially by the wifi being out, but we are bonding together over our shared experiences. However, a temporary ban is now being placed on anyone returning from an overnight trip that involves hostels. WE ARE TAKING NO CHANCES PEOPLE.

Things are moving forward and we have roughly two months left! Who knows what will happen next?

Auf Wiedersehen!!
p.s. Good luck to everyone involved in Disney Enchantment. Hopefully, many people came to support your show on Friday (Oct 7 @ 7:30 pm) and Sunday (October 9 @ 2 pm) in Cantrell Hall.