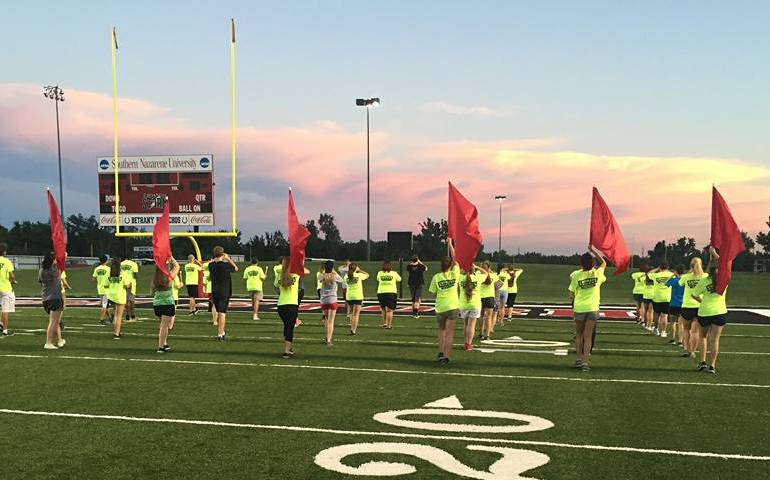 SNU football games had a new audience this year: The Sound of the Storm. This past semester was the first year SNU had a full marching band on the sidelines for the Crimson Storm football team.

One might hear the normal football game songs sprinkled in with music from The Beatles such as “Sgt. Pepper’s Lonely Hearts Club Band” and “Hey Jude.” They chose The Beatles because it brings the musical mood to the older generation and the generation of now. Both alumni and prospective students can be involved in the Beatles’ music as it spans generations.

Students spend an average of eight to ten hours a week practicing as a group along with individual practice time. Matthew Cranston plays the trumpet and is also the loading crew master. He remarked that “I think I see band members more than I see my roommate.”

Professor Daniel Abrego spent his first year at SNU as a professor, marching band recruitment leader and band director. He has been playing piano and trumpet for over thirty years. He was able to bring in about 30 new instrumentalists for SNU through the marching band.

This year’s motto for the band is “Laying the groundworks.” Benji Hughes, a drum major, said, “I wanted to be a part of the history. I felt like I wanted to do something greater than myself, so I joined the marching band.” As a drum major, he says, “conducting the band and being the leader is about 5% of the work. The other 95% is running errands. I’m here to meditate, [and] here to enforce.”

There are many leadership roles that make the marching band function. “Each of the leadership roles are as equally important roles as the other. The only difference between me and all of the others is I wear white pants,” says Hughes. “We’re all very good leaders in what we do. I feel this group of leadership is a very skilled group.”

Being in the marching band is mentally, emotionally and physically straining. “You know those psychological sayings when they say you can’t multi-task? Yeah, those are wrong,” says Hughes. “It takes a lot of stamina because you have to be able to continuously look good and pretend you’re not tired.”

Much like the postal service, these students don’t get a break because of the weather. Cranston says, “Every rehearsal is outside. No matter what, we’re in the heat or in the wind.”

“In high school, I didn’t really know what I wanted to do or what kind of person I wanted to be. When I joined marching band, it was like a really good community and just fun. You made bonds with people on a different level because you’re with each other all the time on the bus,” says Cranston. “It’s a community you can’t really find anywhere else.”

Kaylin Cummings says, “With band, it’s like another outlet to find more friends outside of your major. It’s fun to have experiences with them outside of the classroom.” Hughes remarks, “There is a plethora of different people groups, but I think we all identify as band kids.” The ability to have a group of people come together and identify as a family is valuable to a Christian campus.

Before each show during half-time, an alumna or faculty member will pray with the band members. “The prayer part of the three part model is incorporated into all of it,” says Abrego.

A few weeks ago, the band broke into small groups and talked about prayer requests and praises they had. Many band members, as well as Professor Abrego, look fondly at this time of bonding and growth with reverence. “We’re very intentional in what we do in rehearsals. It’s not always marching and music,” says Hughes.

Here’s to a fantastic semester and hope for the future to come.

If you would like more information on how to join the band or would like to talk to Professor Abrego, please email him at dabrego@mail.snu.edu.