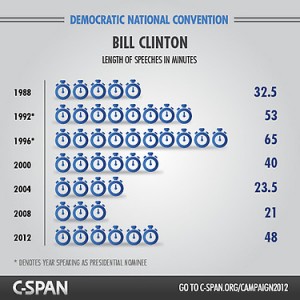 I am a nerd. I have been aware of this for the vast majority of my life, and sometimes it prompts me to do nerdy things like practice for the LSAT for fun.

This past week, my nerdiness manifested itself in checking the math on a C-SPAN infographic that came across my Facebook home page. In the wake of Bill Clinton’s 48 minute DNC speech, this infographic showed the length of all of his speeches in terms of clocks. Its visually appealing nature caught my attention, but it was the contradictions in the numbers that kept it.

Now, a small error like this in a non-controversial infographic is not a major issue. After all, during the weeks of the DNC and RNC, who really cares how long Bill Clinton’s DNC speeches have been? However, it does raise an important point about the way we have shared information during this election season.

If you are anything like me, you have some Facebook friends who frequently share images and infographics of a partisan nature. They will quote Founding Fathers, use excerpted quotes from the opposition party and perhaps even cite statistics. However, these infographics are sometimes dishonest in their simplicity, concealing important information and considerations. 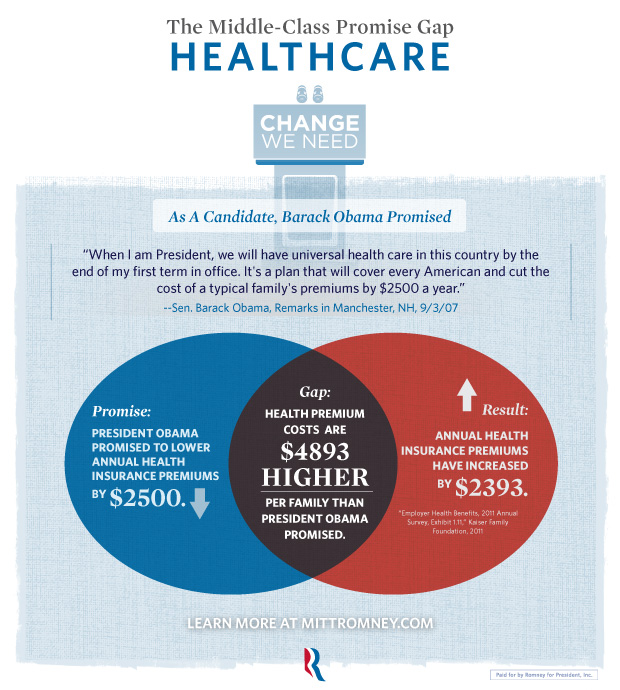 Consider an infographic I received in an email from the Romney campaign; It purports to show a gap between what President Obama has promised in terms of health care and the present reality. In looking at the cited report from the Kaiser Family Foundation, it seems that his campaign’s analysis is correct: the average annual family premium in 2008 was $12,680 and in 2011 it was $15,073 (at least according to the Kaiser Family Foundation).

However, citing simply this statistic out of context hides some important trends. If I were a Democratic strategist, I would point out that from 2000 to 2008, the average annual family premium rose from $6,438 to $12,680. “Premiums almost doubled under President Bush, and Mitt Romney and his ‘Republican team’ would simply be more of the same!” I would exclaim defiantly (complete with infographic of course). I might excuse this less-than-ideal result on the economic crisis, noting that the full extent of the crisis would have been far from obvious in September 2007 when then-candidate Obama made this statement.

But all of these retorts would be pointless. There will not be a thoughtful discussion of healthcare trends in the US, its drivers, its costs and performance relative to other developed nations. Virality is more important than accuracy, which is why infographics like this will use one chart out of a 200 page report. They are meant to be shared and liked, not critiqued. They are for click-throughs to the campaign’s donation page, not to the source.

(Please note, my selection of a Romney infographic is not meant to suggest that Republicans are the only ones responsible for this; I have similarly received infographics from the Obama campaign and am aware that Democrats are also guilty of these practices.)

Similarly, each side has pilloried quotes from the other campaign by taking them out of context.

Democrats portray Romney’s campaign statement that it won’t be dictated by fact-checkers as a total abandonment of facts and reality, when in reality it seems to be based on the belief that at least some fact-checkers are not objective. Republicans continue to trumpet Obama’s statement “If you’ve got a business—you didn’t build that” as an attack on entrepreneurship when in context it was discussing social goods (like infrastructure and education) that benefit, but are beyond the scope of, businesses.

The dissembling in these attacks and infographics has worn thin. While their simplicity is their appeal, it is also their flaw. At a time when America needs real dialogue to enact real solutions, all we are left with is these new sound-bites. And they are destroying civility, cooperation and hope.