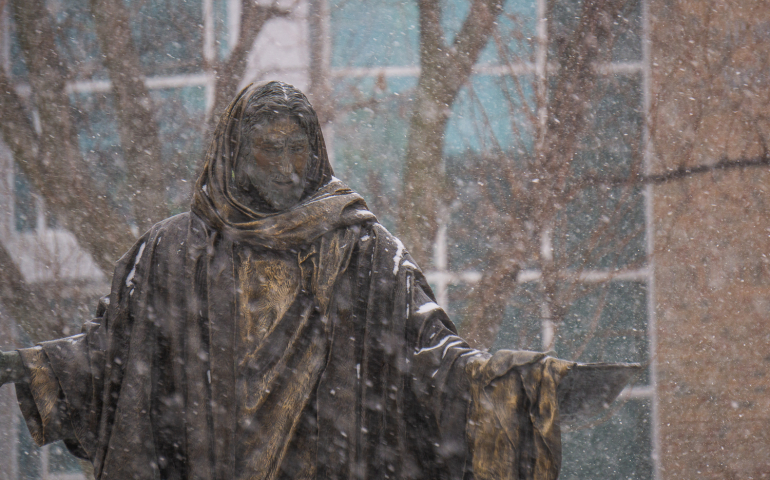 When it comes to predicting the weather, the task seems daunting; far more often than not weather patterns change as time rolls on. Early last week, when the weatherman called for a winter storm to hit that week, people were skeptical to believe its accuracy. However, the weather this past week was “snow joke,” as the first winter storm of 2022 hit Oklahoma City on Wednesday afternoon. This storm broke state records as the state was turned into a winter wonderland.

During the multiple days of the snowstorm, areas around Oklahoma City received nearly 8 inches of snow, with wind gusts up to 35 miles per hour and wind chills as low as -2 degrees. On Thursday the 3rd, 2.9 inches of snow accumulated on the ground, smashing the original record held in 1913. SNU decided to have virtual classes for two of the three weekdays. On Friday, classes were canceled completely during the storm, and students were able to relax in their rooms or enjoy the snow outside.

Junior, Dalen Smith, enjoyed having snow for the third consecutive year here at SNU. “I did a little bit of homework and a group of us went out to go sledding,” said Smith. “We like to do that every chance we get here.” The aftermath of the snowstorm left a thick white blanket covering the campus for all to indulge in, and had the fountains outside of the Commons building completely frozen over.

The university took no time in announcing its campus-wide snowball fight that happened on Bracken Lawn last Friday. Among the many patrons that showed, Dalen Smith was there to partake in the snowball battle. “There were a lot of people that showed up and we were there for over an hour,” said Smith. “We threw snowballs at each other until there was no more snow on Bracken Lawn for us to throw.”

The university faculty were there playing right alongside the students and provided a great activity on campus that many students will remember for the remainder of their lives. The students were also very grateful that many SNU faculty members drove on the icy roads to come and serve food and take care of students as the winter week finished.

Overall, the winter storm that struck Oklahoma City this last week was surely one to behold. The melting snowmen throughout campus and spots of yellow grass sprouting up through the snow indicate that this time of frozen enjoyment has come to an end. But, who is to say the gusts of winter won’t come back again?