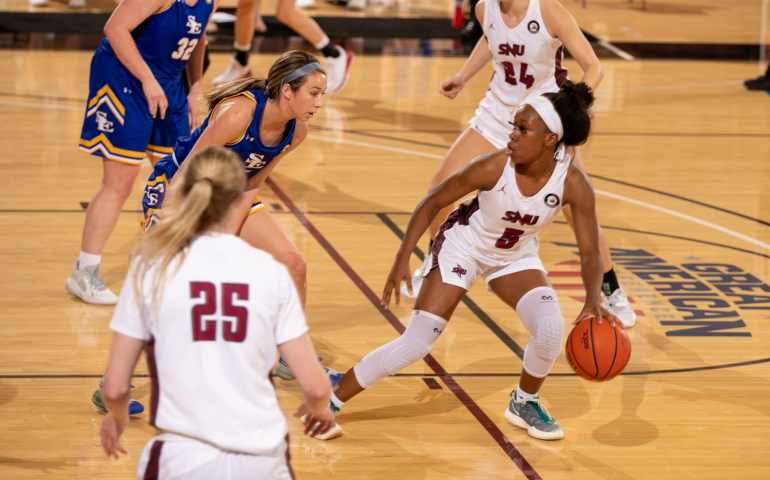 SNU has two home games in their opening week before they travel to Lubbock for a tournament. Jaycee Soap, a senior at SNU, said, “I am super excited for our home opener this season because I can’t wait for everyone to see all of the hard work our girls have been putting in this preseason.” Graduate student Lexi Jones said, “The season has finally come and all the emotions of getting back on the court one last season is starting to hit me. Now that we are the defending champs, every team is going to want to beat us out.”

Soap and Jones have both been a part of this team for a while now and have watched their team grow into a championship winning team. Jones describes her team atmosphere as “energetic. Everyone on the team is dialed into one huge goal, and that is winning the national championship. No matter if we are doing a community service project or conditioning we still have a smile on our face because we know the end result and it’s amazing.”

The SNU Women’s Basketball team gets to travel to a fun location this season during the second week of their season. Jones said, “What I am looking forward to the most this season are the road trips and team bonding. This year we are able to fly to Alaska for a Thanksgiving tournament. Last year, due to COVID, we weren’t able to travel so I believe this will be a great opportunity for us to bond as a team.” Follow along with the SNU girls as they play three games in Fairbanks, AK by broadcasting their games through the SNU Athletics website.

After winning the GAC Conference Championship last season, the girls are hungry to defend their title. With SWOSU ranking above SNU this upcoming season, these girls are chomping at the bit to get back on the court. Soap said, “I would describe our team atmosphere as ‘hungry.’ Everyone has a great work ethic and is constantly trying to get better every day while trying to better others at the same time. I think our most challenging opponent will probably be SWOSU because we both have a lot of returning players from last year and we both know how the other plays as well.”

Last year the season was cut short due to COVID, with only 16 games being played in the 2020 season as opposed to the scheduled 29 games this season. Come out and support the women’s basketball team this season!