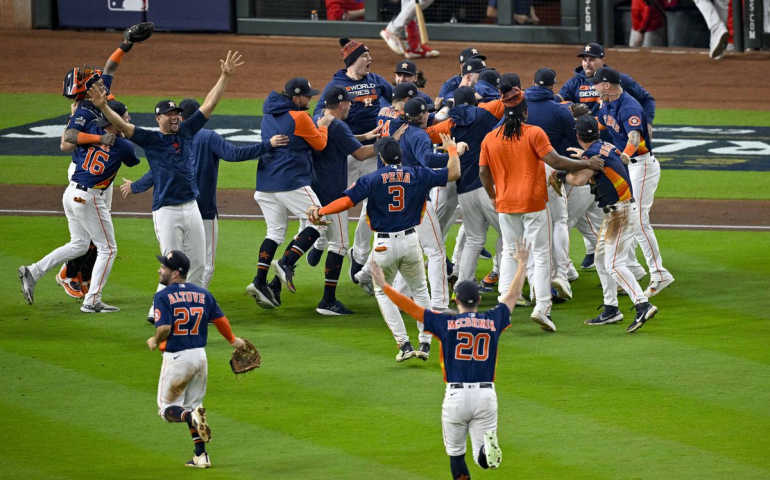 Major League Baseball reached the pinnacle of its season with the World Series starting in the last days of October. In this series, the best of the best face off to see who is the ultimate champion of the Major League Baseball, or MLB. From the National League, the red-hot Philadelphia Phillies hoped to keep their playoff magic alive as they reached their first World Series since 2009. The Houston Astros reclaimed the top spot in the AL from the American League without losing a single game in the postseason. These two teams faced off making this one of the most historic World Series of all time.

Game one started with two dominant aces on the mound for each team. Aaron Nola for the Phillies, and Justin Verlander for the Astros. After a strong start from Houston, Philadelphia would mount a comeback and take game one 6-5. Game two debuted a fantastic show of hitting with the Astros tying up the series with a 5-2 victory. Game three marked the first World Series game in Philadelphia in thirteen years. The Phillies would show out for their home fans as they set a new record hitting five home runs in a single World Series game crushing the Astros 7-0.

Feeling the momentum, Philly was looking to continue their home game dominance heading into game four, but Christian Javier and the Houston pitching staff had other ideas. The Astros would go on to throw the second no-hitter in World Series history, and the first combined no-hitter in the fall classic, as the Astros once again tied the series up at two wins a piece. The rubber match of game five truly was a nail bitter till the very end. With back-and-forth action, Houston had a lead going into the ninth inning where Chas McCormick would make a game-saving catch while colliding into the wall. If he hadn’t, the Phillies would have taken the lead and potentially won the game.

Going back to Houston, all eyes were on the Phillies as they were facing elimination trying to force a game seven. Kyle Schwarber for Philly hit a solo home run in the sixth inning to take the lead and momentum for the Phillies. A few moments later, power bat Yordan Alvarez hit a mammoth homerun to dead center to take the lead. The Astros would go on to win their second championship title in five years. Houston’s manager Dusty Baker was the oldest and most winningest manager in MLB history without a championship ring, ending his streak and winning his first with the Astros.

Rookie sensation Jeremy Peña won the World Series MVP award becoming the first rookie to win both the ALCS and WS MVP. Despite the controversy surrounding the 2017 sign-stealing scandal, the Houston Astros have proven that they are a powerhouse in the MLB and show no signs of slowing down anytime soon. Personally, I am over the moon about the Astros winning the World Series because they are my favorite team that I’ve loved since I was a young baseball fan. It truly was an amazing MLB season with all the stars showing up and setting the bar high for next season.