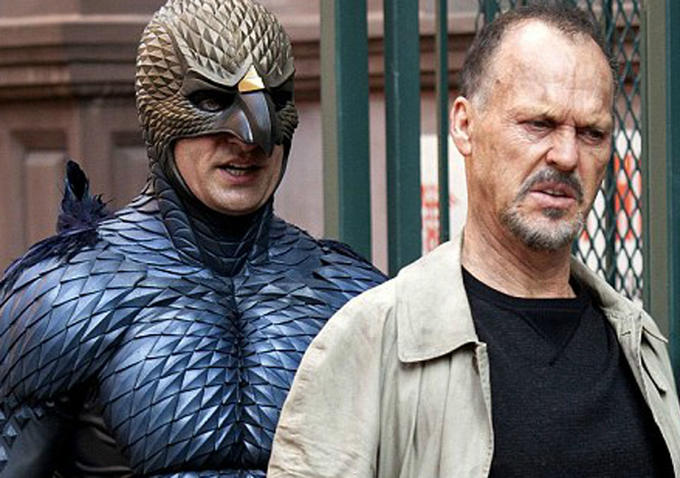 The movie Birdman centers around a sordid actor trying to reclaim what little of his career he has left. Riggan Thomson (played by Michael Keaton) is desperately trying to cling onto his waning fame in an ever-changing society that he refuses to be a part of. He also wishes to stay as blissfully ignorant to the world of technology that has our younger generations enamored to the point of obsession. While he is battling the levels of society that he knows nothing of, he is simultaneously fighting a voice inside his head that snaps at his weaknesses like the way his drug-addicted daughter (played by Emma Stone) snaps at him. This movie is, at its core, a journey of a man as he is trying to set up a play that is supposed to skyrocket him back into the life of being a household name in our present day American society.

The way the director (Alejandro G. Inarritu) shoots the movie makes it seem as if it is shot in one take. One shot, in fact, lasts more than 45 minutes as the camera is twisted, pulled, and traced up and down corridors around the actors. This role is almost perfect for Keaton, who many people said peaked 20 years ago playing a superhero on the silver screen. The role he plays is like a mirrored-world version of the real man, as if Keaton is playing the role of the man he could have become and one he almost became. This similarity strikes close to home for the actor, which can be seen when watching the movie.

Riggan’s foil in the movie is a brilliant, but volatile actor named Mike Shiner (played by Edward Norton), who is reckless and cocky to the point of sabotaging the movie at points. Throughout the film, Riggan is seen performing tricks of telekinesis as well as seen viewing Birdman flying through the city. It is never truly revealed if this was just a hallucination or if it was real. One can assume that it is all a hallucination, as the movie depicts Riggans mind deteriorating as his quest for validation intensifies.

Birdman has been acclaimed across the board, including winning the Oscar for Best Movie of the Year. In truth, this movie is going to go down as a classic for years to come. With a fantastic ensemble cast and an almost suicidal camera technique, this film has definitely pushed the boundaries and raised the proverbial bar for years to come, certainly launching Inarritu into a respected position as a director. To say the least, Birdman is an amazing movie that I definitely recommend to anyone who is looking for a good ride and for good characters to invest their time in.