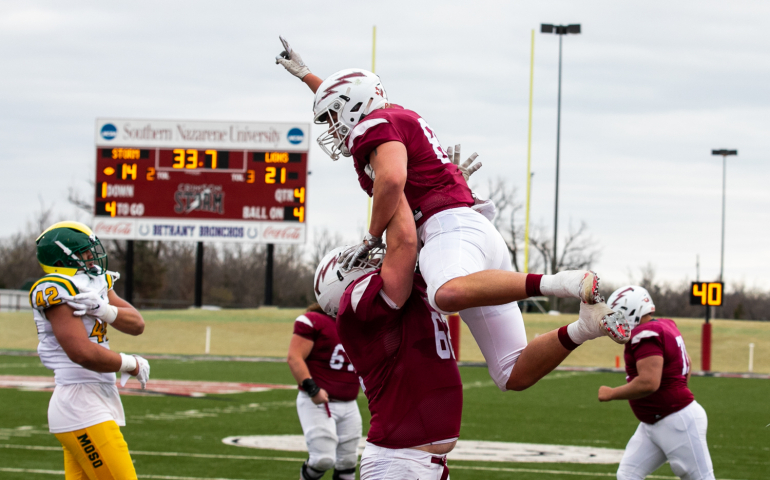 This past Thursday, the Southern Nazarene football team traveled down to the University of Arkansas Monticello for their first game of the season. The Crimson Storm came out to a slow start beginning the game trailing 23-7 midway through the second quarter, then going into halftime trailing 30-7. After making many adjustments on both sides of the ball the Storm came out in the second half looking like a new team as the crimson defense completely shut down the weevil’s offense and allowed no points to be scored in the second half. It started with a safety to put some points on the board and get the ball to the offense with momentum on our side. They went on to score 14 unanswered points to fight back and bring the game within 1 possession with the score at 30-23. Unfortunately with all the momentum on our side, they simply just ran out of time to complete the comeback and walk away with a win.

We caught up with starting junior defensive back and Southern Nazarene’s men’s athlete of the week Cameron Wells and this is what he had to say about their outstanding defensive performance in the second half: “Defensively we blitzed the quarterback more frequently and played more man coverage.” With these adjustments it kept the offense of the Weevils on their toes and always seeing something different caused them to break rhythm and not get anything going in the second half.

The offense also got things rolling in the second half to fuel the comeback. Things began to turn around for the offense when quarterback Jarvis Davis checked into the game. “They did a good job of having a lot more pace and execution than the first half,” Wells said. The Storm offense went on to score 14 unanswered points and the defense added 2 points with a safety all in the second half before ultimately running out of time and falling short of a victory.

The team has a lot of upside and the players are excited for what the season has in store for them. Wells went on to compliment his squad on the fight they had even when trailing in this game, “we are going to be a relentless and fierce team, and we are capable of beating anyone in our conference if we put four quarters together.”

The next contest for the Crimson Storm football team is Saturday, September 11 against Ouachita Baptist at 1:00pm, where they look to get their first win of the season at home.