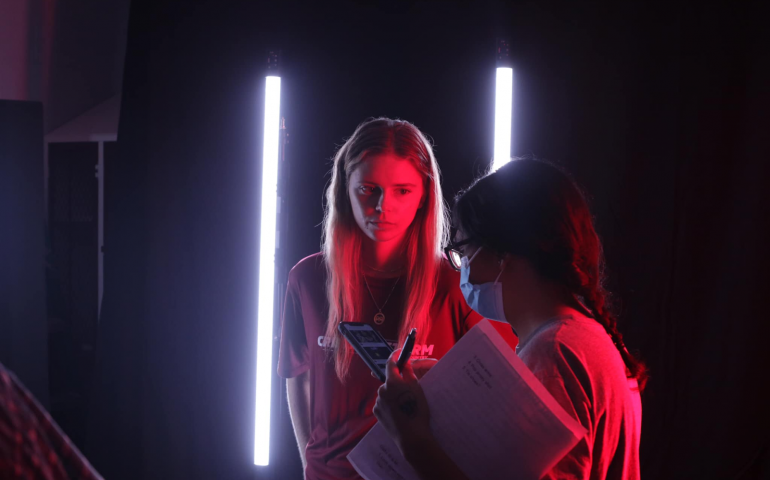 Bolts up! The first SNU Athletics “Media Day” of the semester was a success! Media Day was a day dedicated to photographing the athletes at SNU. It took place in Sawyer Center, which is the athletics building located on the campus of Southern Nazarene University, on August 22 and 24. It was considered “Part 1” of Media Day, and it was specifically for SNU football, men’s and Women’s Soccer, Men’s and Women’s Cross Country, and Men’s and Women’s Golf.

Media Day provided a fun and creative way to photograph the athletes. SNU Creative, which is the creative team for Southern Nazarene University, was in charge of the media. The photographers and videographers worked hard to create and capture the athletes of  SNU.

Karsyn Matthews, a junior at SNU and captain of the women’s soccer team, participated in Media Day. She has played soccer every year for SNU, but this was her first official “Media Day.” She explained, “We took headshots and live-action pictures. We also took videos with the LED lights.” When asked what she looks forward to the most about being an athlete this year, Karsyn replied, “Hopefully getting to play in the spring.”

Unfortunately, SNU sports are canceled for the fall semester of 2020, due to the effects of COVID-19. Instead, many of them are being pushed back to the spring 2021 semester. This will allow athletes the opportunity to still play sports this school year. Media Day is important because the athletes of SNU need to be recognized and supported, even though they may not be on the court or field this semester. This day provided a chance to capture their hard work and dedication to their sport, team, and school.

Hailee Thompson, a senior at SNU, is a photographer for SNU Creative. She said, “I was responsible for creating a schedule, coming up with concepts for action photos and capturing as well as editing the action shots too. We really wanted to put on a functional event that was also enjoyable for athletes and have high energy.” She explained, “This was the first time SNU had an actual media day with multi-sports teams and the first one SNU creative has put on.”

Hailee also said, “The best part is seeing all of the athletes and their different personalities and character through the images. It was a lot of fun having them all there together and brought light to such a difficult time for them right now. The biggest challenge was getting great images for such a high quantity of people in a short amount of time.”

Stay tuned to see these pictures and videos, and to see other sports as well! For more information and updates about SNU Athletics, check out @snuathletics on Instagram!