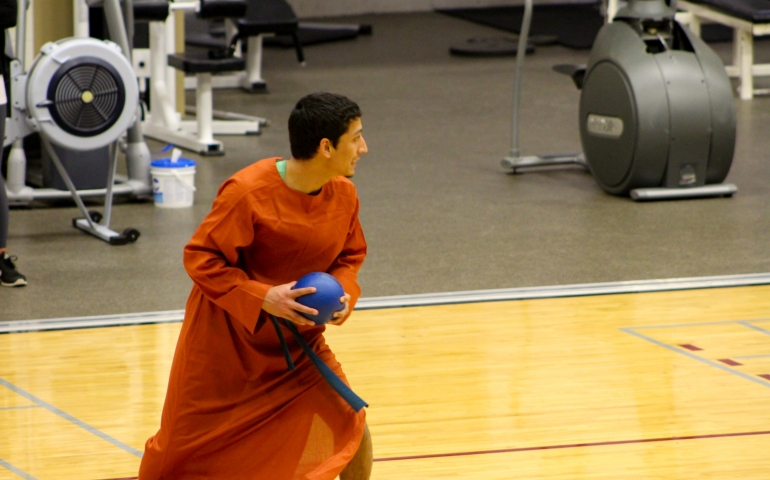 On Friday, Jan. 24, students enjoyed the Southern Nazarene University (SNU) annual dodgeball tournament. This was a fun event that was open to all students. It took place in Broadhurst on SNU’s campus. The event kicked off at 7 p.m. and lasted until 10 p.m. It consisted of two teams competing against each other, followed by two new teams, and so on. There were also elimination rounds to eliminate the losing teams. Teams continued to compete throughout the night to get to the final round.

It was a classic tournament that consisted of several different teams, each with eight players encouraged to have a uniform “theme.” Teams competed to see who had the most creative uniform theme.. The team that won this costume contest dressed up as the disciples from “The Last Supper.”

The players were not the only ones who enjoyed the tournament. Many other SNU students packed the bleachers in Broadhurst to cheer on their friends and watch them compete. There were free snacks and drinks for everyone provided by SGA, and who doesn’t love free food? This was a fun event that provided students with a great opportunity to compete with other students or cheer on their friends.

Emma Evans, freshman at SNU and spiritual life representative for SGA, participated in the dodgeball tournament. She loved it because she got to be with her friends. Her favorite part was “coming up with a team name: ‘Natasha Average Team.’” Emma and her team dressed up as The Bachelor contestants. She said, “We had name tags and roses. Next year will be better.” She said that she had fun even though her team didn’t win. When asked if she would recommend competing in future dodgeball tournaments, she said, “Absolutely! One million percent… because then I can beat you!” Emma plans to compete in the dodgeball tournament all four years of college.

Austin Schoenfeldt, a senior at SNU, is another student who participated in the dodgeball tournament. He has played every year that he has been a student at SNU and was proud to be on this year’s winning team, “The Washed Up Seniors.” He said that his favorite part of the event was “playing with all of my senior friends.” He would recommend participating in this tournament to other students because, he said, “It is a lot of fun!”

If you did not attend the dodgeball tournament this year, you should definitely check it out next year. Whether you play or not, it is a lot of fun and a great way to hang out and socialize with other SNU students while getting some great entertainment.