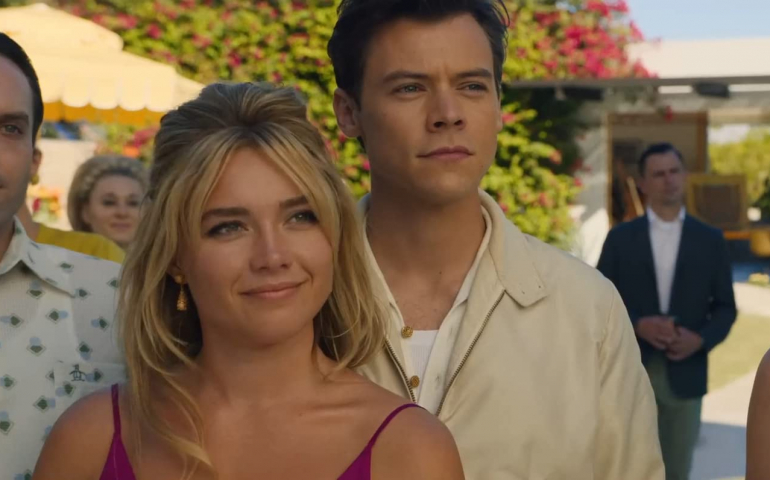 Don’t Worry Darling is a film that has been marred by the controversy surrounding the making of and its press, whether it be Shia LeBeouf’s exit from the film, director Olivia Wilde’s new relationship with actor Harry Styles, Florence Pugh refusing to promote the film, and Styles possibly even spitting on Chris Pine at the film’s premiere. It’s a lot to take in, very much like the movie itself.

Taking place in a town called Victory, very much styled to look like the late 1950s, Alice (Pugh) and Jack (Styles) are happily married and very much in love. Jack goes to his secretive job with his friends (Nick Kroll and Asif Ali), while Alice stays home, cleaning the house and hanging out with her own friends (Wilde and Kate Berlant). However, when all seems well and good, Alice starts to sense that things are not what they seem, especially after mysterious occurrences begin to happen to another friend, the exiled Margaret (Kiki Layne).

This is one of those movies that is predicated on a big twist, and as such, my plot summary will stop there, and I will be very careful about not spoiling in case those reading have not seen it. What I can say is that this is certainly an ambitious film, from both a technical and a story standpoint. It has a lot on its mind and it is doing it all in an incredibly flashy way. Wilde is an incredibly confident filmmaker, with a lot of dynamic camerawork (bolstered by great cinematography from Matthew Libatique), and manages to shoot every scene with a clear intent. From a technical view, this film is unimpeachable, and I think the film may end up scoring Oscar nominations for Costume Design and Production Design, both of which are terrific.

The biggest failing of the film, however, is the writing. The dialogue itself is fine, as well as what the twist is on paper. However, it was done in a surprisingly sloppy way, with the writers seeming like they had preferred the intrigue of what was going on, and then forgot about it, throwing it in at the last possible second. It’s frustrating to watch, because this could have been truly great, but it ends up falling short of that.

What ended up saving the film from being a great-looking but poor film was a lot of the acting, chief among them being Pugh’s performance. Pugh is such a world-class actress, and she elevates this material to incredibly watchable heights. It’s a shame things went down on set the way they did, because she very well could have been looked at for Oscar consideration, even though the film has not gotten the greatest reviews from most. The other standout of the film is Pine, who is having a great time playing against type as the cult leader-esque founder of Victory. It’s so interesting to see his movie star charisma and good looks be twisted into something rotten. The rest of the cast does a mostly fine job in their given roles, but the weakest performance in the movie is Styles. It’s not that he’s bad; he’s mostly pretty good in his role, if a little out of his element when acting next to Florence Pugh. However, there are a few moments toward the end of the film where he really goes for it and it simply does not work. These scenes especially made me wonder what it would have been like if Shia LaBeouf was in this role (probably better, but who am I to guess).

Don’t Worry Darling could have been great, but it’s merely good. It’s an incredibly well-crafted film with strong performances from Pugh and Pine, but the writing and Styles ended up dragging this film down from something it could have been. Don’t worry (pun intended), I would still recommend people watch it, but keep your expectations in check.