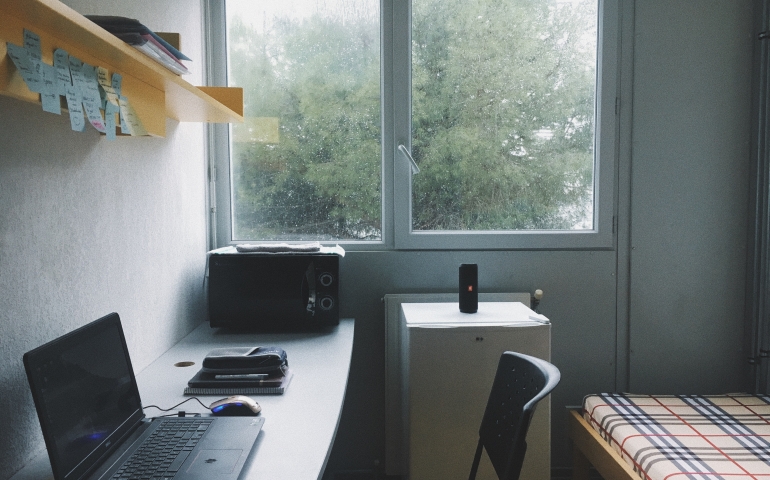 Dorm Room Life is a learning experience, just like Southern Nazarene University’s (SNU) classes. At SNU, there are multiple housing options for students to live in such as Bracken, A.M Hills and even Snowbarger Hall. What makes these places so exciting to live in? Well, it’s the community of course! Two students explain their journey in these residential places.

Taylor Womack, a Junior Mass Communications major, lived in Bracken Hall her freshman year but now lives in the Hills complex. Womack’s experience was like any other: “[The] best thing about living in Bracken was how close everyone is. Doors are always open, and it’s hard not to make friends there.” But there are always negative sides to all residential places. Womack then explained the bathroom situation in Bracken, saying, “Sometimes sharing a bathroom with 6 girls is stressful.”

Womack later shares the spiritual growth aspect within the dorm environment: “RA’s pour into the residents by sending encouraging texts, checking in on them and praying for them. My RA held a small group for my hall.” Womack then continues to explain that what surprised her the most about dorm life was how involved the RA’s were and how much community was built there.

There are also many benefits to living in dorms such as being connected with people and the convenience of being so close to campus. Womack explains her life in the dorm, saying, “Dorm life is spontaneous and fun and a huge relationship-builder. It’s like a slumber party every night, especially when you live with or close to friends.”

Womack gives her advice for applying for housing, explaining, “I personally think Bracken is ideal for freshman. Hills is fun with friends… go ask around and try to see what a day in each looks like.”

Spencer Jornod, a Commercial Music Production major, lived in Snowbarger hall during his freshman and sophomore years. He is now a Residential Advisor for A.M. Hills. He gives his input about what surprised him about Snowbarger: “When I was a freshman, I was really surprised about how quickly I met a ton of friends… it seemed like just within the first few hours, all of a sudden I had at least four friends.” What also surprised him was the community aspect in the halls.

While the communal experience of Snowbarger is unlike any other residential dorm, there are some well-known setbacks to the dorm. Jornod then goofily explains about Snowbarger that “everyone can agree when you walk through that door there is a waft. But you know what, the community’s fun! But there’s still a waft.”

But besides Bracken and Snowbarger, there is also a co-ed dorm called A.M. Hills. Womack and Jornod do agree on how new and nice everything is, including the community areas of the place. Jornod comments, “For Hills, one thing that is special is the environment. It is more of an intimate setting where you have less people in a suite or in a hall which creates a softer environment to get to know people.

Jornod then comments about what Hills has to offer: “Hills house offers amazing parties. One of them is the Halloween hall door decorations where you decorate your door for Halloween, which is a ton of fun. Another activity offered is Hills Feast, and that’s basically where everybody in Hills House gathers together for a Thanksgiving dinner before Thanksgiving break.” Womack, then explained a grievance with the dorm, saying, “The fire alarm goes off a little too often.”

All in all, Southern Nazarene University has an amazing community throughout campus, partially because of the close community developed within these residential dorms.