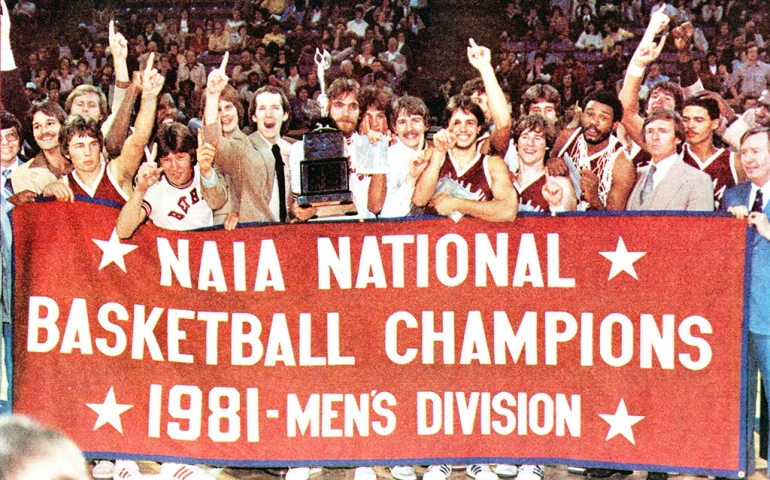 Legacy by direct definition means: something (as memories or knowledge) that come from the past or a person of the past. However when put in context and personal experience, legacy means much, much more.

Dr. Peggy Poteet and, her husband, Jim Poteet — classmates from Pasadena College, colleagues, and dear friends of both Dr. Gresham and Linda Gresham — reminisce on multiple fond memories with Gresham about their years of service alongside one another.

“When Jim, my husband, and Loren were coaching together, you know how during a timeout the team will circle up and talk? Dr. Gresham would always take a towel and wipe up the sweaty bench while they were talking. I mean, and nobody asked him to do that, it was just kind of a servant thing.”

Dr. Poteet goes on to explain that Gresham and his wife’s mission and ministry at our university has always been to connect with students.

When asked what legacy she thought Dr. Loren Gresham would leave behind, Poteet stated, “You can look around and see the physical signs of him being here like the Sawyer Center and the Science Building. He’s represented us well on different boards in the city and on the Council of Christian Colleges and Universities. One thing that is really distinctive is his and Linda’s, they were together as [a] team, interest in students. They have hundreds of students over at the house at numerous times during the year. He’s always been interested in students and connecting with them.”

Poteet expounds on her personal experiences with Gresham and his deep passion and desire for students to expand their global perspective. On a trip to London, England, she recalls, “One spooky evening, Dr. Hackler (who was a student then) and I ‘kidnapped’ him (Dr. Gresham) for a ride to Stoke Poges cemetery, outside of London, where we used flashlights to find the grave of Thomas Gray, author of the famous ‘Elegy in a Country Churchyard.’ It was a truly gothic evening.”

Followed by Jim Poteet, whom Gresham was an assistant coach with for the duration of Poteet’s term,  Mills was the head coach of the men’s basketball team at Bethany Nazarene College for two years. Dr. Mills and Gresham worked together indirectly for eight years, and three of the eight years they radio broadcast with one another.

When asked who Dr. Gresham has become to him during the years, he responded, “He has  been a tremendous colleague and support. You will not find one person with a wider area of interest. At the center of all that is a heart and passion for students and the university. So it has been a pure joy and honor to have that relationship with him and for the past twenty-eight years being under his direction. I don’t believe there’s any better president at any university in America, maybe the world.”

Dr. Larry Mills referred to Dr. Loren Gresham’s legacy, here at Southern Nazarene University, as the “legacy of all legacies.”

Twenty-seven, almost twenty-eight years ago, Loren P. Gresham became the President of Southern Nazarene University, previously known as Bethany Nazarene College.  He received his Bachelor of Arts from Pasadena College (Point Loma Nazarene University) in the year 1962, and then Gresham earned his Master’s degree in the field of international relations at the University of Southern California.

Two years after graduating undergrad, he and Linda Brown, his former classmate and now lovely bride, were married. A few years after, their family, now consisting of their daughter Suzanne, moved to Bethany, Oklahoma. Gresham assumed a political science teaching job at Bethany Nazarene College and pursued his graduate studies within the same area of expertise at the University of Oklahoma, and completed the degree in 1973.

Basketball is one of Dr. Gresham’s enduring passions, and in 1981 as the head coach of Bethany Nazarene College, his team won the national championship in the National Association of Intercollegiate Athletics.

Dr. Gresham became provost, or dean of academics, in 1985. Four years later, Gresham was delegated by the Board of Trustees to become president of Bethany Nazarene College.

Amid the eight other Nazarene Universities in the country, as well as universities in Oklahoma, Dr. Gresham currently has held the longest incumbency.

[author image=”http://echo.snu.edu/wp-content/uploads/2016/11/sydney.jpg”] Sydney Jones, Guest Writer
Sydney Jones is from Wellington, Tx and a sophomore at Southern Nazarene University. After going undecided this fall semester, she just recently declared Mass Communications, and by the end of the Spring 2017 semester will have completed her minor in music. Sydney is unsure of the exact career path she wants to take, but plans to become a worship pastor one day. [/author]