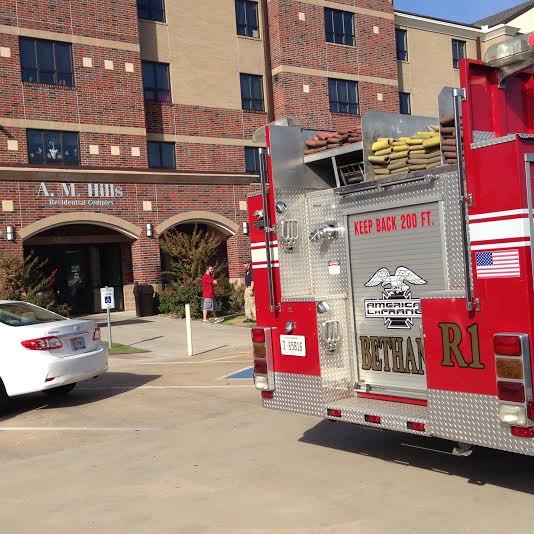 When students hear the alarm go off their first thought is ‘who did it and how did they do it?’ When the Resident Directors of the dorm buildings hear the alarm, there are a couple of procedures that run through their mind.

“When the fire alarm goes off, the first thing I do is check the box that tells me what room it’s coming from. Right after, I start heading to that room to see how severe the situation is. As I am going to the room, I call our security to make sure that they have called the fire department,” said Tim Cole, RD of A.M. Hills.

Snowbarger RD, Davis Hodam, checks with each Resident Advisor to make sure everyone is out of the building. He then calls security to make sure that the fire department has been called.

Along with the RDs, the RAs also have responsibilities in the event of a fire alarm.

“As soon as the fire alarms go off, the RAs have to get their key and go to every room on their hall. They will go in each room and make sure that all of their residents are evacuated from the building. Once they have gone through each room, they evacuate themselves [as well],” said Cole. To students it may feel like the fire alarm goes off a lot more often than it really does.

Cole thinks that, roughly, the fire alarm goes off anywhere between eight to twelve times a year. The reasons for fire alarms going off can be endless.

“My wife and I just set one off a couple of weeks ago because she simply turned our stove top on to make eggs. She hadn’t even put the eggs on and the alarm went off,” said Hodam.

“Smoke from cooking something a little too long is usually why the alarms go off. I have seen our residents burn stuff in the microwave before too.” He also has had a resident burn things that one might not know could be burned. “For instance, I have had a resident burn an Oreo in the Microwave,” said Cole.

The fire alarms are also triggered by the pipes in the building getting either too hot or too cold, according to Cole.

With as many times as the alarms have been set off in either dormitory, one might wonder if a fire has ever really happened.

“Two summers ago there was nobody in the building and I got a call that the fire alarms were going off. My wife Casey and I went back to the dorm to see where it was coming from. When we were walking up we could smell smoke and realized that there was a real fire somewhere. We saw that it was coming from the Bud Robinson room. When I opened the door to go in Bud, a cloud of smoke came rushing out. We saw that it was coming from the Hills kitchen. I ran over there and all the sprinklers were going off. When I opened the kitchen door there was about a 6 foot fire coming out of the oven and going up to the ceiling. I ran out to find a fire extinguisher, and one of our security guards found one. We both ran in the kitchen and put out the fire. That is the reason why we have a brand new Hills kitchen now,” said Cole.

Through all of the hustle and bustle RDs and RAs have to go through in the event of a fire, SNU Security has a specific procedure to undertake.

Glen Holcomb explained the procedures security takes when the fire alarms go off around campus:  “The dispatcher receives the alarm from the fire reporting system from Simplex and immediately identifies the exact location of the alarm source from the fire reporting system. The dispatcher communicates to the on duty security officer of the alarm location and dispatches the officer to the call.  At the same time, the dispatcher is calling Bethany Fire Department and advises them of the location and any updated information, such as if a student calls and says they are burning food, which is most likely. Upon arrival, the security officer ensures everyone is exiting the building. The security officer immediately opens the fire panel so the fire department can observe the proper alarm report from the fire panel, while at the same time, firefighters are going to the exact room or floor.”

“The loud alarm is not turned off by anyone until it is deemed safe. If any type of danger or fire is apparent, the fire department does whatever is necessary to extinguish it.  SNU Security makes a written report on any fire or possible fire, and it is kept on a fire log sheet.  Everyone is allowed back into the building once it is deemed safe,” said Holcomb.

While there are many procedures to be taken in the event of the fire alarm going off, there is another important factor in play: cost.

“Currently, there is no cost from the city of Bethany for the calls they make to our university. The city manager understands the university has almost 800 residents living on campus and things will occur with young cooks. This is why they mandate that we only have microwaves and not toaster ovens or any type of heating element that can cause flames. We have all of the rules on cooking in our student handbook.”

The cost of fire alarms and equipment is a high cost to maintain, especially with very old buildings on campus.

[author image=”http://echo.snu.edu/wp-content/uploads/2014/10/533092_3891782345524_1597660129_n.jpg” ]Ashlynn McGuire, Guest Contributor Ashlynn is majoring in Psychology. SHe is the kind of girl who would rather write down her thoughts, memories and emotions. Being able to understand people through explanations in her major helps her describe those thoughts memories and emotions. She also love hanging out with friends and reading a good book to occupy my free time!![/author]