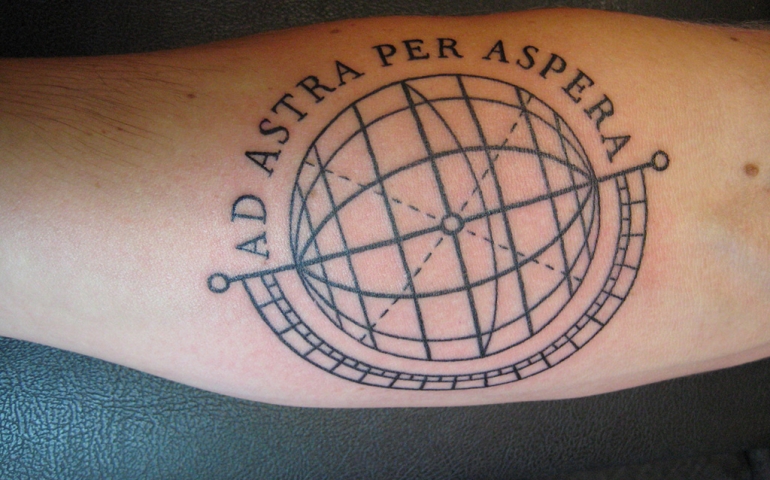 A cross. A loved one’s initials. Maybe even a favorite bible verse. It’s no secret that tattoos have taken root in our college culture. In order to understand why young people are getting inked at such a rapid pace, let us look at some SNU students who wear their tats proudly.

Jessica has one of the more unique tattoo stories out of the students I talked to. She has a small “B” on her left wrist. In July 2012, Jessica, her brother, JC, and her dad, Jody, found themselves bored in the city of Austin. Collectively, they decided to get tattoos to pass the time. The two men called up their usual tattoo artist, Bloodline Elite’s Eric Grover, to see if he had any recommendations in the Austin area. Eric pointed them to a parlor, and the three went, as a family, to get tattoos.

When asked about how tattoos will affect her future employment, Jessica wasn’t worried. “I think [tattooing] is becoming more accepted in our generation, but there will always be people who will be set in their ways.” Because she is going into graphic design, she insists that others in her field will be accepting of the choice to get tattoos.

“Say if I were to go to a big company… they maybe wouldn’t accept me with a tattoo, but that just means I don’t want a job there” said Jessica. “If [a company] can’t accept me for who I am and who I’ve chosen to be, I don’t want to work for them”.

Baker is a student known for his eccentric sense of humor and off-beat style, which are reflected in his seven tattoos. He sports his favorite on his thigh, a drawing of the stuffed animal Hobbes from Calvin and Hobbes, surrounded by the phrase “Let’s Go Exploring.” The phrase is taken from the last panel of the last strip of the comic.

“Any time I see that [panel] with Calvin and Hobbes on the sled, I still get a little knot in my chest,” said Baker. “It was such a life-changing comic.”

For this tattoo, Baker knew he wanted only the best to put it on his body. “I had gone around to some places and talked to some guys,” he said. Finally, in September 2012, he decided to utilize the skills of Caleb Lyons at Beauty From Pain Tattoo in the Paseo district. Right after the work was finished, Baker rushed back to SNU to participate in Kick For The Cause, which he admits “wasn’t my best idea”.

Unlike Jessica, Baker takes a different approach to society accepting his tattoos. He says that as a culture, we now look at people and don’t judge them as harshly based on their tattoos. However, he believes that “professionally, I don’t think that’s really changing in the same way.” To remedy this issue, Baker has gotten his tattoos only in places that can be covered by business-casual attire. That way, he doesn’t have to worry about being turned down just because of what’s on his skin. While his future tattoo ideas aren’t set in stone, he hopes to continue adding more to his already large collection.

Mikey is the newest to the world of tattoos out of those that I interviewed. He has a sparrow on his hand that was created by Boston at Stay True Tattoo. At the time, around September 2013, Mikey was suffering from debilitating anxiety and depression.

“I was worried about a lot of stuff, mostly about self-image and things like that,” said Mikey. The sparrow reminds him of an old hymn that his dad loved called “His Eye Is on the Sparrow,”  which uses references taken from the sermon on the mount. Seeing the sparrow on his hand comforts him, knowing that he doesn’t need to worry or fear.

Unlike the other two students I interviewed, Mikey has had an experience with the business world not appreciating tattoos. He described recently talking to a Starbucks manager about covering up his tattoo. The manager requested he cover up the sparrow with makeup or a bandage if he were to be hired.

“That was the first time I had felt like what I had done was absolutely permanent,” said Mikey. “This might actually detriment me.”

When asked if he would get the tattoo in the same place if he could do it over, Mikey said that he would probably get it on his wrist, although he is content with where it is.

Tattoos have very different meanings from person to person. What we put on our body tells the world the story of who we are, and each of the three students I interviewed had a story to tell. If someone you know around campus has a tattoo, it’s okay to ask them about it. They may just open up in a profound and unexpected way, like Jessica, Baker and Mikey.