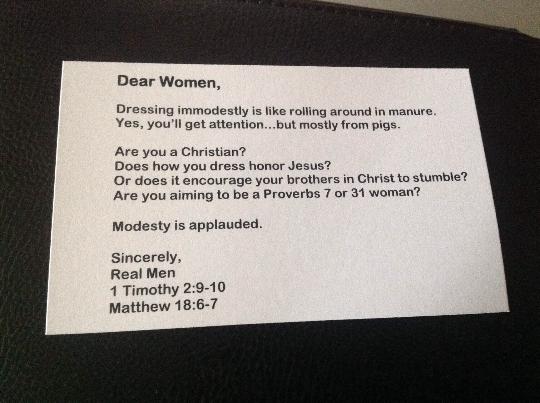 Naturally, there was a bit of a backlash on these notes from people on campus who found fault with these notes, both for their content and the method of delivery. I’m here to address both of these concerns and express why I found them particularly disgusting.

These notes were stating three main points. One, there is something morally wrong with the way women on campus are dressing. Two, it is a woman’s responsibility to ensure that her brothers in Christ are not thinking lustful thoughts of her. And, finally, that the writer of these notes knows what is best for women to do. I’d like to break down each of these points for you.

There is something morally wrong with the way women on campus are dressing; I personally have not seen, in my entire career at SNU, a single outfit on anyone that I would describe as immoral. As far as I understand it, there is no morality bar that we can all look at to say if a pair of shorts is too short or a spaghetti strap too thin. So then, how do we decide if people are dressing in a moral fashion? The only thing that makes an article of clothing good or bad is how it is perceived; so then, if you find yourself having trouble lusting after that girl’s booty in the short shorts, there’s only two options for you: either do some self evaluation and realize that you’re the one having the dirty thoughts and change how you’re thinking of another human being, or stop staring at the booty. If you’ll notice, both of those options are actions that need to be taken on the part of the person with the wandering eyes, not the girl being oogled. Which brings me perfectly into my next point.

It is the responsibility of women to make sure their brothers in Christ are not stumbling. Now, before you start sending me emails talking about all the verses that say we should support each other in our walks, let me say this: I do believe that we should help one another out. We live in a rough world, and we should love and take care of our brothers and sisters, but that is not what this person is saying. The logic here is that if women didn’t dress like sluts in low cut shirts and shorts, then men wouldn’t have trouble with lusting after women! The problem here is, if a man is lusting after women, it doesn’t matter what she’s wearing, lusting will happen. In the past I’ve struggled heavily with porn and hardcore lusting all the time, and I can attest to the fact that it’s just as easy to think dirty thoughts about a woman in jeans and a t-shirt as a woman in a bikini. This same logic is used anytime a person is raped, and someone says ‘well they shouldn’t have been wearing that’ or ‘They should have known better than to be in that kind of place’. If someone is robbed at knifepoint and stabbed, no one would tell them that it was their fault for having money in their wallet or skin that’s too easy to stab. The problem here isn’t with what women are wearing, it’s with men who find it easier to try and make women change than to try and change themselves. This is why something needs to be said to whoever wrote this note.

So, what makes the author of these notes such an expert on what women should wear? I highly doubt that he is Jesus, and since he in all likelihood is not our Lord and Savior, what authority is he speaking on? The fact of the matter is, whoever wrote these is no more entitled to having a say in what is put on anyone’s body than the lamp of learning is.

To end this rant on a positive note, I’d like to say something to the women of this campus. Homegirls, keep doing you; keep putting together outfits that make you feel like you could walk in a room and make everyone in it gasp a little bit. Don’t let some note stop you from being as you as you can be; hold your heads high knowing that the only thing governing your body is you.

[author image=”http://echo.snu.edu/wp-content/uploads/2014/10/me.jpg” ]Baker Pitts, Guest Contributors
Baker is a sassy and brassy senior. He doesn’t really do much, but he sure does it well. [/author]