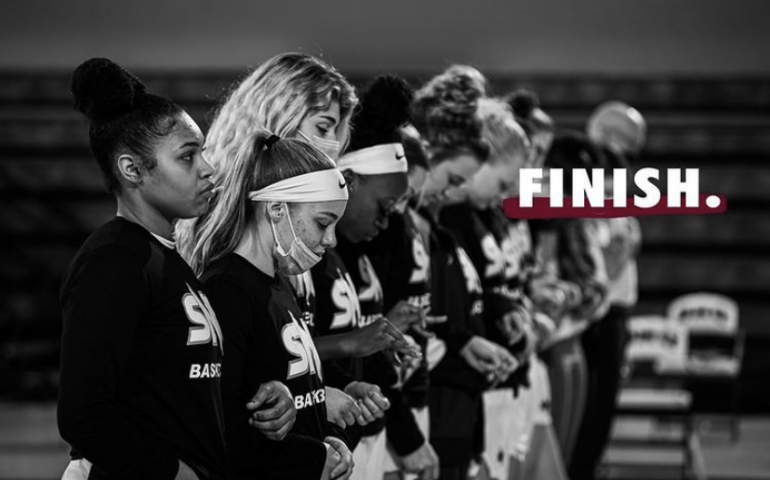 On March 7th, the SNU women’s basketball team won the GAC Championship against Southeastern Oklahoma State in a very close, hard-fought game. This was the first time the SNU women’s basketball team has won a GAC Championship in the history of the school. The game was a dog fight, especially in the last two minutes of the game. SNU was down seven points but scored nine straight points while Southeastern put up zero.

This is the first conference championship since SNU has joined the NCAA Division II. The last tournament title given to the women’s team was during the 2010-11 season. The girls fought tooth and nail to squeeze out the win against Southeastern. Cassandra Awatt, a sophomore guard, was named the GAC Tournament MVP, leading the team with 21 points. Abby Niehues and Payton Jones joined Awatt on the GAC All-Tournament team scoring 16 points and 14 points, respectively.

After winning the GAC Championship, the women’s basketball team made their first appearance in the NCAA Tournament in the program’s history on March 12th. Southern Nazarene was up against Texas A&M-Commerce during the regional quarterfinal. The team was down by around 20 points entering the fourth quarter, but their fire never died. The girls fought until the last point but sadly came up short with a final score of 70-64.

Payton Jones led the team with 20 points, but close behind her were Cassandra Awatt with 12 points and Kennedy Gillete with 10 points. The Southern Nazarene women’s basketball team finished with a 12-8 season on the year, won the GAC Conference Championship, and made it to the first round of the NCAA Tournament.

When asked what the team could have done better this season, Cassandra Awatt said, “I think this season we as a team could have been better at the intensity we brought. We would normally kick into gear around the 3rd and 4th quarter.” She was also asked how she thinks next season will be. Awatt saying, “I think next season will be different yet the same. We still have the majority of the team coming back, but it will be different because the entire team is going to continue working on our craft and contribute different elements.”

Emily Monaghan, a sophomore guard, was asked if she (and the team) were ready to come back for round two at the GAC Tournament next season. Monaghan said, “We are definitely ready to get back to work and would love to win the GAC again, but have bigger goals in mind as well.” She was also asked how it felt to win the GAC Championship, “Amazing. In a way, it was like a dream realized. It is something that we have all dreamed of since we were young and to achieve it with this team, these coaches and trainers made it even more special.