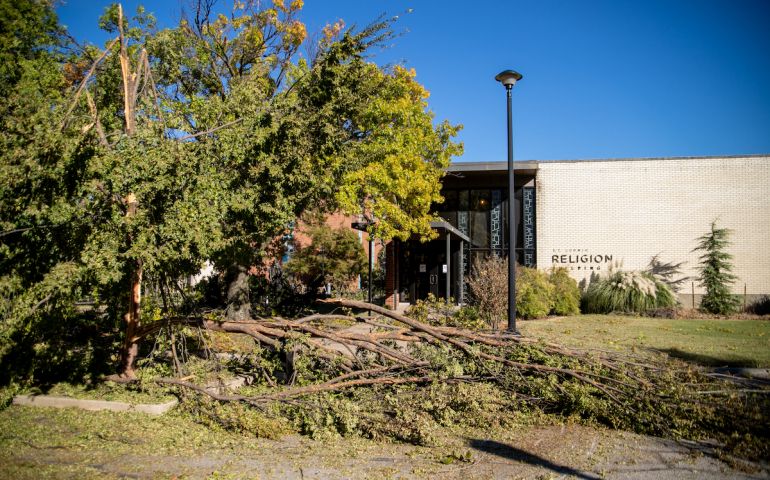 Southern Nazarene University experienced a severe ice storm last week. On Monday, October 26, a winter storm came through and lasted for several days. Things began to freeze throughout the day, and on Tuesday, students woke up to a winter wonderland. Trees were covered in ice, icicles were hanging from every building, and cars were frozen shut! SNU decided to move all classes to online starting at 1 PM on Monday, lasting until 8 AM on Wednesday. However, the power went out across campus on Tuesday, October 27, at around 2:00 PM.

Unfortunately, the ice caused mass power outages across the Bethany and Oklahoma City areas, and trees began to break and fall due to the pressure of the ice. Because of these conditions and power outages, SNU canceled all classes until the following week. Because nobody was sure when the power would be restored, there was no sure way to complete assignments and Zoom.

For many students, the power outages provided a welcome break. Some stayed on campus and braved the loss of heat and power, while others went home or found somewhere else to stay. On Wednesday, a few buildings, such as Bracken, Snowbarger, and Chapman, received power for a few hours, but it went out again after a while. Therefore, everyone continued to stay put and stay warm wherever they were. Thankfully, power returned across campus on Friday, October 30. The weather was sunnier, the ice was melted, and students began returning to campus.

Gracie Wimmer, an RA of A.M. Hills stayed on campus during the ice storm and power outage. She said she has been in ice storms before, but “not one that has caused a power outage.” She said, “It was exciting and different! We did spontaneous things and it was fun finding ways to hang out without technology and lights.” She did, however, add, “it was hard to not be able to take a warm shower.”

People have been working and volunteering to clear out the trees and branches that covered campus. Students have also offered to serve others across Oklahoma City and clean up their homes and yards from the mess that the storm caused. Students and faculty are glad that everyone is safe, warm, and back on campus to finish the rest of the semester!