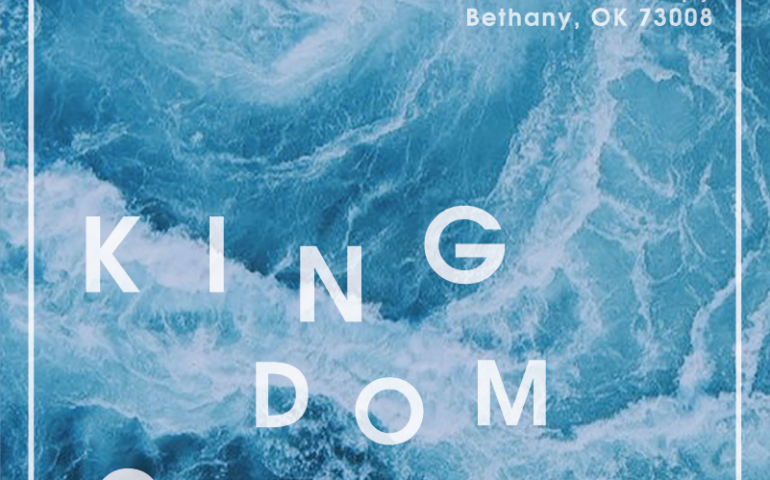 This last Thursday night, August 31, students from Southern Nazarene University (SNU) gathered together to worship at Serve Coffee Shop on 39th Expy across from the campus in Bethany.

For those that do not know, Kingdom Come is a student lead worship service hosted by the Campus Ministries branch of SNU’s Student Government Association (SGA).

The night included worship music led by Sydney Jones, Jackson Witt and Bernard Castaneda. This was followed by a powerful testimony of the power of Christ to change lives shared by Easton Holstine, SGA Junior Class Campus Ministries Representative.

Malory Brake, SGA Senior Class Campus Ministries Representative, shared her hopes and vision for what this year would hold, and Luke Luker, SGA campus ministries executive, shared a short message and his hope for the year.

I interviewed Luke Luker to better understand why the move of Kingdom Come from the Campus of SNU to Serve Coffee Shop.

“I think that Serve is the perfect place to have it (Kingdom Come)” said Luke Luker, “It’s right in the middle of Bethany, and it is where our community is.”

Luke Luker went on to talk about how they had the idea to host Kingdom Come there last year. Campus Ministries held a worship night in the coffee shop that was a big success.

“It was one of the best Kingdom Comes we had ever had… my favorite from last year,” claimed Luker.

According to Luke Luker, the night was such a success for Serve Coffee Shop as well that they wanted to host every Kingdom Come this semester.

One of the students who attended last Thursday night’s service was Koryna Arroyo, junior at SNU. “I really liked the environment, it (had a) community vibe.”

Koryna Arroyo went on to talk about how the worship was good, and there were many more people there than she thought there would be.

“I didn’t think I would prefer it here… but after being here… I’m fine with it not being on campus, because the atmosphere is good.”

Luke Luker stated that his main hope for this year’s Kingdom Come was “that we build a bigger community, a better community of praise and worship and that everyone loves each other.”

Kingdom Come will be held at Serve Coffee Shop all semester long on Thursday nights at 9 p.m. The following is a list of upcoming dates for Kingdom Come:

Marshall was born in the great city of Houston, Texas. Currently Marshall is a senior at Southern Nazarene University, studying Mass Communication. Marshall has a love for all things bluegrass, coffee, and outdoors.Before becoming Editor-in-Chief at The Echo, Marshall served as both the publication’s Business Manager and as a Staff Writer.[/author]