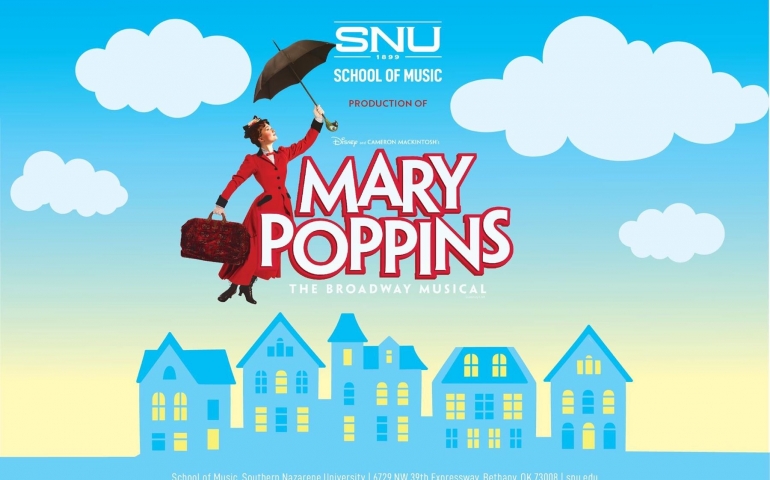 Southern Nazarene University’s School of Music hosted their spring musical, “Mary Poppins,” this past weekend! There were a total of five productions on this weekend. It began on Thursday, March 5, at 10 AM, followed by two productions on Friday at 10 AM and 7 PM, and two more on Saturday at 10 AM and 7 PM. These took place in Herrick Auditorium on Southern Nazarene University’s campus.

Many SNU students participated in this production, along with some children who helped. “Mary Poppins” is a classic broadway musical, and the School of Music did a great job making it their own! Jeffrey Ambrosini was the stage director, and Rebekah Ambrosini was the music director and producer. Jim Graves was the conductor of the orchestra, along with Ricky Spears, who was the orchestra manager. Those are just a few names behind this amazing production, but there are so many more who contributed.

Overall, there was a great turnout! Each production consisted of great music and acting, along with some humor that kept the audience entertained and amused. Also, If you were a student with a Crimson Card, you got in for free!

Lindsey Mears, a freshman at SNU, played the role of Winifred Banks, in “Mary Poppins.” She was a part of the pit chorus last year in “Seussical the Musical,” but she said, “This was my first time being a part in a show at SNU.” A lot of hard work was put into this production, and Lindsey explained that “we got our scripts before Christmas break and I learned all my songs and lines before I came back from that…”

Her favorite memory was “being backstage and dancing around with the crew during all the songs I wasn’t on for. They always made me laugh.” Lindsey also said that she will be back next year!

Her favorite memory was “probably when some of us cast members randomly started to do the Macarena to  some of the songs.” She also will definitely participate in the musicals again. She explained, “I grew up loving music and acting, so being able to do it in college is awesome. I also loved getting to meet new people and form new friendships!”

If you did not attend the musical this year, you should definitely check out the next one! It is great to support other SNU students who worked so hard on these productions, while also getting some great entertainment in return!